Fresh off the back of his national headline tour, breakthrough Australian artist Mason Dane today shares the highly anticipated official T-Mix of his viral hit “DASH” featuring none other than American heavy weight rapper T-Pain. Stream and download the track HERE.

After first being discovered by T-Pain via Twitch for the original release of his single “DASH”, sparking a viral reaction video the two artists have since formed a buddying relationship. Watch the reaction video HERE.

On the collaboration, Mason notes “Being able to finally release this remix is so exciting and it’s super surreal. Being a kid growing up and listening to t-pain is something I think most of us can relate to, so to be able to have built this relationship with him and be able to share a song with him is just crazy. Massive love to Pain and his team for not only blessing me with this remix but also all the hospitality and love they’ve shown on my trip to the states.”

After taking a keen liking to buddying young artist, T-Pain invited Mason to Atlanta to meet and collaborate. Arriving hot into the studio, the duo wasted no time in getting down to business and documenting the epic session in the process. Watch the video HERE.

Speaking to the video, Mason adds “This video was shot at his house at about 2am just hours before we flew out of Atlanta & was all super impromptu and organic. It’s equal parts hilarious, fire & fitting to the story thus far. I’m super grateful to have it shot by an Aussie, we had to bring the last addition out to get it done & I’m just super gassed that it’s finally out. Let’s go!! T-Mix baby!” 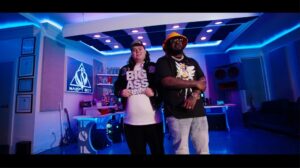 While Mason may be only 22, the Newcastle born and raised artist’s energy and hustle is unmatched. The young master of many has already accomplished a few goals that many and most artists only dream of.

The T-MIX of “DASH” highlights how much Mason has stepped forward as his own artist, showcasing his versatility in going from Trap to Pop to EDM to the wealth of connections his made along the way.

Being a self-taught songwriter and producer, Mason started his journey by creating a makeshift studio out of his parents Series 2000 Caravan and self-producing and releasing his first EP. Now his credited for his work with some of Australia’s best and brightest such as Manu Crooks, Blessed, Hooligan Hefs and Day1 and having recently shared his critically acclaimed EP ‘Chasing Home’ earlier in the year.

On the success of “DASH”, Mason adds “In the past months my life has changed so much. In a few short months I’ve built a tiktok following and connected with T-Pain who I grew up listening to and its pretty surreal. My streams have gone crazy since that moment and I’m just really excited for what the future holds and I’ve been making the best music I have ever made.”

Stay tuned for more to come from Mason Dane!