Liberation Records are elated to release Mansionair’s brilliant sophomore record Happiness, Guaranteed. today. Coinciding with the album release, the Sydney trio also appeared on triple j’s Like A Version this morning, performing an epic rework of Labrinth’s ‘Still Don’t Know My Name’ (from HBO’s hit show, Euphoria) along with their current single ‘Next High’.

Yesterday, the band was also announced on the line-up for this year’s Spilt Milk Festival, alongside acts like Flume, Genesis Owusu and Mallrat. The events will take place in Canberra, Ballarat and the Gold Coast at year’s end. The trio are excited to return to the live arena in just a few weeks, as they prepare to debut a brand new live set for their looming, local headline dates spanning the east coast, ahead of a larger US run from late May to late June. If today’s Like A Version performance is anything to go by, the shows are not to be missed!

Happiness, Guaranteed. is a very worthy follow up to Mansionair’s popular debut, 2019’s Shadowboxer and a masterclass in what the talented band do best. A steady flow of singles that kept fans satisfied in the throes of the pandemic have all found a home on the glistening new, double-sided 15 track offering.

“This album is about wrestling with the idea of happiness. That it is not a destination that we ultimately arrive at. Reframing contentment and learning how to navigate ourselves in a world so geared toward success and arriving.”

The first half of the record was borne primarily out of two secluded writing trips outside of Sydney and feature original, all Mansionair penned tracks, such as the bold and brash ‘MORE’. Feeling burnt out and disconnected after a relentless couple of years of global touring (this was pre-pandemic), the band hired an isolated cabin and a farmhouse off an abandoned freight line for the trips, and brought things back to basics, hanging out and jamming together as three friends. They enlisted the help of Jon Gilmore, English producer-extraordinaire, to mix and breathe fresh life into these songs.

WATCH MANSIONAIR’S LIVE VERSION OF ‘NEXT HIGH’ ABOVE

The second half of Happiness, Guaranteed. highlights many of the band’s more recent collaborations with a host of big industry names, including current single ‘Next High’ (with Kim Tee), ‘Guillotine’ (with NoMBe), ‘Right Into You’ (with Claptone + Like Mike), ‘Don’t Wait’ (with Yahtzel) and their recent monster hit with Dom Dolla in ‘Strangers’.

With over 270 million streams to their name, a Grammy nomination for their collaboration on ‘Line Of Sight’ with Odesza, three ARIA certified GOLD singles – ‘Easier’, ‘Astronaut (Something About Your Love)’ and ‘Falling’ – and more live shows than most bands aspire to, Mansionair are back brighter than ever with Happiness, Guaranteed.

Catch them on their Happiness, Guaranteed. tour with fellow Sydney-siders and purveyors of dream pop, Micra, next month. Limited tickets remain. 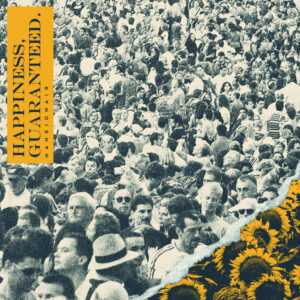