Dynamic Perth six-piece Mal de Mer have today announced their glistening new single Do You See Me?, an eclectic, irresistible track that details the tough, dramatic reclaimation of personal power that occurs when a toxic relationship ends, out today, November 24.  Mal de Mer have also announced a visually stunning lyric video to accompany the track, made in collaboration with photographer Mare Elzinga.

Do You See Me? is the result of a truly unique amalgamation of influences; evocative of everything from Camp Cope to Andy Shauf to BADBADNOTGOOD, in other words – it’s just Mal de Mer.  Steady, funk-inspired bass lines sit harmoniously amongst sharp, vintage synths while lead vocalist Saskia Fleming’s distinctive voice confidently takes centre stage; handclaps and crisp drums drive the song forward – it’s a curious number, and the expert mesh of genres within this single is nothing new to this skilled group.  Speaking on the inspiration behind Do You See Me?, Saskia explains, “The song came about when I was in a pretty dark headspace.  At the time, I was trapped in an exhausting combination of deep sadness, and overwhelming anger.  I’ll let the lyrics speak for themselves, but I hope the listener can feel those emotions wash over them as they flow through the song.  When I finally plucked up the courage to show the band what I’d written I was blown away- everybody’s parts felt like essential pieces of the song that were meant to be there all along.  It was like everything just clicked into place.”

Mal de Mer DO YOU SEE ME – official lyric video

The video for Do You See Me? is a quaint, child-like celebration of the formidable lyrics in this song.  Nostalgic, colourful, crafty, and clever, the lyrics are built from small letter beads, all mismatched and topsy-turvy.  Explaining the brilliant idea behind the video, Saskia says, “It’s a stop motion lyric video using beads, pastel felts, and glitter (among many other things!!).  My housemate Freddie came home one day from Spotlight with a load of colourful beads, and made me a necklace with a lyric from this single on it.  When I was given the necklace, it at first sparked the idea of doing a very limited run of merch in the form of jewelry for this track.  That idea then snowballed into doing an entire stop motion lyric video using those beads. The concept is using colourful childlike craft supplies to create a clip that at first seems upbeat, and straightforward, but over the course of the track, gradually begins to reveal it to be a facade hiding the dark reality of what is going on beneath the surface.  I worked on the concept with the amazing director Mare Elzinga, who took my basic idea and has brought it to life.”

Mal de Mer, a French maritime term for seasickness, is a band with an undeniable, unbreakable connection to the ocean.  The band’s name is a part of family history for lead vocalist Saskia, as she explains, “My family has had a long history with water and the ocean – a captain, a swimmer, a pirate, a professor of maritime law, a sailor… so I guess naming the band was a way for me to feel like I was continuing that family history.  Looking back on deciding the name now though, I think I may have just been tricked by my mum who strategically placed a thick book of nautical phrases and sayings in front of me when I was trying to name the band….” 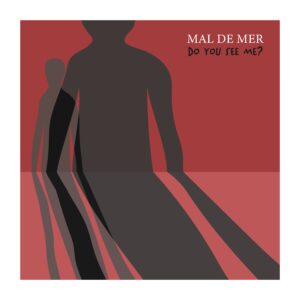