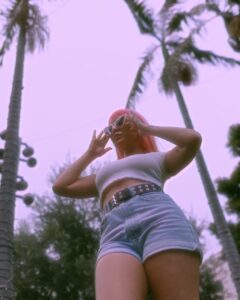 Her original focus was to be a vocalist and songwriter, but she quickly became intrigued on diving deeper and learning electronic production to create her sonic world. KEANA found it difficult to have her vision translated sonically through other producers. This is when she took interest in producing her own music and having full control, creatively speaking. Once KEANA discovered her sound, it was like everything fell perfectly into place and she knew her life’s purpose, which is to make people tune into their emotions by having an experience and then connecting with themselves on a deeper, intuitive level. This connection deepens every time she expresses herself musically. “Music is a healing gift, a chance for people to connect with others, to think, to feel, to let go, to escape,” confides KEANA.

Her latest single “Lilac” is about feeling the need for escapism through times of hardship and struggle. KEANA confides, “it speaks about wanting to be transported to another world where life stresses and fear do not exist. It is inspired by a dream I had one night I believe when I was living in Boston at the time. In this dream I heard this voice speaking to me. I felt that it was guiding me to this mysterious place where I could relax in paradise. The only way I could describe this being was a ‘White Phantom,’ this being of light that took me to places of “lilac islands and lavender beaches.” The song features dreamy vocals and layers of rich musical textures over beautifully crafted synth pop soundscapes.