Bold and unafraid to speak her mind, twenty year old Lucy Sugerman is back with her latest single “Paralysed,” set to be her fourth single release from her debut EP hurt that’s man made. The track leaves no part of teenage heartbreak untouched – wrapping up the often debilitating feeling of your first break-up in a cheeky indie-pop guitar-driven gem.

Writing about her coming of age experiences of modern love and life, Sugerman says the track is the saddest, yet the most upbeat song, on her debut EP hurt that’s man made. Written with Joel Quartermain (Eskimo Joe, Fergus James, G Flip, merci, mercy, Meg Mac), Lucy lets people into her world through relatable tales of her struggles and triumphs in romance and growing up, showing that they are not alone and cathartically capturing the spirit in learning from your own experiences.

“Time moves dreadfully slow when you’re 17 and devastated over a boy.” Lucy says, speaking on the track. “The poor guy didn’t even do anything wrong. I’m just glad something cathartic you can dance and scream too was born out of a period in my teens of being so upset.”

Inspired by her songwriting heroes from the 70s and with a knack for confessional storytelling tied with assured pop hooks, Sugerman’s addictive and youthful energy perpetuates her music, even in her most vulnerable moments.

“I wrote the track on my first ever writing trip to Melbourne. I’d gotten broken up with for the first time that year and it was my first year out of school, so I went into all the sessions armed with things to write about. I couldn’t stop singing about the breakup – it felt like I was stuck in time, and stuck in my hometown – all things that reminded me of this boy. All my friends were getting stuck into real adult life and I wasn’t doing much and everything felt like it was terrible and wouldn’t let up. ‘paralysed’ is the most literal and diaristic song on my EP, and arguably has the saddest lyrics, despite Joel and I picking a fast tempo, writing with major resolving pop chords and Joel layering up the fun guitar-based production. I guess now I can laugh about how sad I was, and I have a bunch of songs I’m proud of to remember that period of my life,” Lucy speaks.

2020 was a huge year for Lucy, releasing her debut single, “i wanna kiss boys cos i’m bored” (co-written and produced with Hauskey and MUKI), premiered and spotlighted on triple J Unearthed and added to Spotify’s New Music Friday AU & NZ and Indie Pop playlists. Sugerman’s debut was followed by her second single “Colourblind” released in 2021, co-written and produced with Dylan Nash (Dean Lewis, Eluera, Shannen James, The Million).

Lucy was the recipient of one of APRA AMCOS’ Women in Music Mentorships as well as a part of their first ever Song Generations writing camp at ANU School of Music. Lucywas also selected to be a part of APRA AMCOS’ SongHubs Melbourne 2021, the first ever all women and non-binary identifying songwriting sessions of its kind, alongside the likes of Alex Lahey, Eilish Gilligan, Ninajirachi, Odette, Tulliah, Woodes, and guest writers Montaigne, G Flip, KLP, Lisa Mitchell and Anna Laverty curated by Gretta Ray. Sugarman has also opened for SummerSalt Festival in Canberra, joining a lineup alongside Montaigne, Boy & Bear, John Butler, The Teskey Brothers and the CatEmpire.

Lucy Sugerman lets people into her world through relatable tales of her struggles and triumphs in romance and growing up with ‘paralysed’ She shows people that they are not alone, and captures the humour and spirit in learning from your own experiences.

“Paralysed” is available on all platforms now. 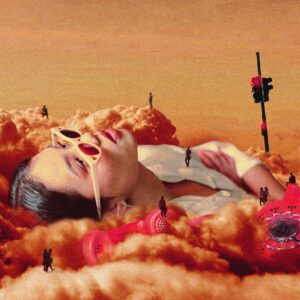