IS HEADING TO SYDNEY’S

Live Nation, the world’s leading live entertainment company, has today announced its global discovery platform, ONES TO WATCH AUSTRALIA, is returning for another live showcase event in NSW this August in partnership with SOUND WEST Music + Tech Festival.

The showcase is set to be held at The Albion Hotel in Paramatta on 25 August, and will feature performances from Western Sydney artists ZPLUTO, Shanae, and ESHAAN.

The showcase is part of an ongoing live event series produced through the Ones To Watch Program, designed to provide emerging artists with the opportunity to connect with local music lovers, and perform in front of key industry professionals.

The Ones To Watch online global artist discovery platform is the number one destination for local music fans to discover their new favourite artists. The platform showcases rising new talent within Australia, including musicians, bands, and producers, who will be provided with professional support to help kickstart their careers by leveraging Live Nation’s global network.

The Ones To Watch program has been hugely successful in progressing the careers of local Australian talent, with previous showcases in Adelaide and the Gold Coast developing the careers of talented Australian artists, including Colourblind, East AV3, Teenage Joans, Hoodzy, Saint Lane, and WIIGZ.

Western Sydney has long been known as a melting-pot of cultures that share a rich passion for music and live entertainment. Home to many incredible artists, the region is one of Australia’s most vibrant and up-and-coming music scenes.

The SOUND WEST Music + Tech Festival is where technology, music, creativity and learning converge in Parramatta from August 20th to 28th 2022. The festival offers discovery, professional development, and networking, and is a premier destination for Australia’s biggest technology and creative brands, entrepreneurs, artists and innovators. Featuring keynote addresses, workshops, mentoring and performances to inspire creative people to achieve their goals, SOUND WEST will feature over 35 curated sessions. 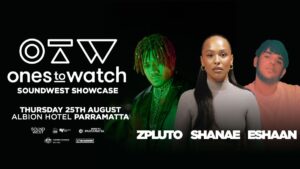 Live Nation and SOUND WEST recognise the immense talent in Western Sydney, and this showcase event is an opportunity for these emerging home-grown artists to connect with an incredible group of industry leaders and music enthusiasts.

Paramatta locals ZPLUTO, Shanae, and ESHAAN are dominating the Western Sydney music scene and launching it onto the national stage.

ZPLUTO brings an electric mix of hip hop, pop and alternative music that captivates audiences. Manoeuvring in a sonic world, ZPLUTO’s lyricism relies on a balance of vulnerability and confidence that sets him apart within the Australian rap scene.

Shanae is fiercely dedicated to empowering and inspiring others by remaining unapologetically true to herself.  Growing up between Australia and South Africa, music became a cultural anchor between nations. With roots in Gospel music and Cpe-Townian Jazz, mixed with New-Soul, RnB, and Hip Hop, Shanae crosses musical genres, delivering an electric medley of sound.

ESHAAN seeks to create an alternate world through his music, where audiences can visualise and understand their feelings in a new context. With lyricism displaying candid vulnerability, ESHAAN’s music blurs the lines between RnB, pop, indie, and electronic, employing a complexity of sound that allows a deeper meaning to unfold upon each listen.

Chris Akavi, Live Nation promoter and Ones To Watch Curator, commented: “The SOUND WEST Ones To Watch event is an incredible opportunity for our featured artists to showcase their talent to both local and global music fans, and connect with a range of key industry members. We have no doubt that the Paramatta live show will be an electric display of the best emerging artists from Western Sydney’s music scene.”

Amanda Brisot, SOUND WEST board member commented: “Artist development, early career support and furthering the career of emerging artists are some of the founding ethos of SOUND WEST and after seeing the amazing shows organised by Live Nation in New Zealand and Gold Coast, the OTW program aligns perfectly with SOUND WEST, we are excited to see the artists perform and support given to them post event by Live Nation via publicity and promotion”.

SOUND WEST is proudly supported by the NSW Government through its tourism and major events agency, Destination NSW.

About ZPLUTO Born in New Zealand, though calling Australia home since 2008, ZPLUTO grew up idolising a wide range of artists who left undeniable impacts across the genres of rock, contemporary pop, hip hop and R&B. For a young ZPLUTO, the way their music unified legions of fans around the world first engaged a spirit within him that has flourished into a music journey all his own. When it comes to his own music, ZPLUTO manoeuvres in a sonic world not unfamiliar to fans of The Kid Laroi, Post Malone, and JuiceWRLD. His lyricism could be pulled from journal entries, melodies and a flow that relies on a balance of vulnerability and confidence to stick the landing. For ZPLUTO, this balance comes naturally. Combining elements of hip hop, pop and alternative music on a palette from which ZPLUTO paints detailed and fresh musical ideas, 2022 stands to be an exciting one for the hip-hop rapper.

About ShanaeWith big energy, tasteful savagery and uncompromising creative vision, Shanae, the Australian-born South African is fearless in her pursuit to be loud and unapologetic about one’s truth.

Born in Sydney, Shanae grew up living between Australia and her parent’s home country of South Africa. Music became her cultural anchor between the country she was born in, and the South African blood running through her veins. Her love and connection to music helped her navigate her identity, her femininity, her drive, her passion and her purpose.

Her deep roots in Gospel music and Cape-Townian Jazz, mixed with her love for Neo-Soul, RnB and Hip-Hop has allowed her to create art without boundaries, enabling her to write and perform from a place of true freedom and absolute certainty. This freedom means she can create music that crosses genres and is impossible to box in, with her strong, confident vocal delivery and razor-sharp lyrics acting as the anchors to keep her art consistent. 2021 saw Shanae release debut single ‘Come On Over’, followed by ‘Locking Eyes’ and ‘Some Type Of Way’, racking up over a million streams.

2022 has seen Shanae place Top 10 in the publicly voted for “Acclaim Allstars Class of 2022”, plus has seen her tour consistently throughout the year, recently supporting PJ Morton across his sold-out Sydney and Melbourne shows. August 2022 will see the highly anticipated release of her single Illusions, plus the release of her debut mixtape.

Finding confidence and strength from Australian based women like Sampa The Great and Kaiit, who have smashed down barriers and changed the face of Australian Music, Shanae as an artist wants to continuing creating on her own terms, and empower and inspire others in the process.

About ESHAANComing off the back of his first live show on the Fair Day main stage at Mardi Gras earlier this year, and the release of his debut single ‘Back To The Future’ on 8th July, Sydney based artist ESHAAN (pronounced ISH-AHN), is starting to bring his world of music and art to life.

The name ESHAAN symbolises triumph through sadness, and understanding one’s purpose as they navigate their way through the world. The name brings forth the ability to destroy in order to recreate, and represents both the blessing and weakness in the ability to detach from defeat, and concentrate on what will physically, spiritually and mentally heal. Using music as a platform to share his journey, ESHAAN seeks to create an alternate world, where one can visualise and understand their feelings in a new context.

Inspired by all that makes up the universe, and how we react and engage to everything within, ESHAAN’s songwriting draws upon his personal experiences, whilst looking to further explore what many others have endured in a similar space. ESHAAN’s lyrics display a candid vulnerability, whilst also employing a complexity that allows a deeper meaning to unfold upon each listen.