Good things come to those who wait… including 8 x ARIA nominees Lime Cordiale!

Hold onto your tickets, folks: due to the ongoing COVID-19 restrictions, Chugg Entertainment, Frontier Touring, Chugg Music and Select Music wish to advise that Sydney Northern Beaches party starters Lime Cordiale are rescheduling their ‘14 Steps To A Better You’ national headline tour from October 2021 to April/May 2022.

Geared up for 2022 to play their biggest live shows ever, with two huge Sydney performances already sold-out Lime Cordiale are pleased to announce a 3rd and FINALhometown show, taking place at Sydney’s Hordern Pavilion on Wednesday 27 April.Tickets will go on sale Friday 24 September (12pm AEST) via www.frontiertouring.com/limecordiale.

Current ticket holders don’t need to take any action – your tix remain valid for the 2022 shows (see below dates). Patrons unable to attend the 2002 dates may obtain a refund. Requests must be submitted prior to Friday 22 October – contact your ticketing agency for more details.

That’s not all the news: on triple j Breakfast this morning Lime Cordiale premiered their brand new single  ‘Apple Crumble’ –  recorded with actor/musician/DJ and record label boss Idris Elba! The song will feature on a forthcoming mini album, Cordi Elba, available Friday 14 January (via Chugg Music and 7Wallace Music). The band will also head to the UK/Europe in January & February 2022 before returning home for the ‘14 Steps To A Better You’ AU tour.

Three special guests will be joining Lime Cordiale on the road in Australia next year: rising stars Teenage Dads, ILUKA and Dulcie.

Performing one show only in Fremantle on Friday 8 April (Teenage Dads not performing this show) is WA indie-pop four-piece Dulcie. The girls officially joined forces as a band back in 2018, following years of friendship. Since then, with their effortless, three-vocalist stylings winning fans everywhere they’ve gone on to support Polish Club and G-Flip (with an Ocean Alley tour to come), hit the stage at festivals like Groovin the Moo, and have a new EP on its way. Listen to Dulcie here.

Hailing from Sydney’s Northern Beaches, Lime Cordiale – comprising brothers Louis and Oli Leimbach – have had an explosive rise. The band’s second album, 14 Steps To A Better You, topped the ARIA Album Chart in July 2020, earning the biggest first week sales for an Australian artist album between January-November that year. Scoring an unprecedented five tracks in the top quarter of triple j’s Hottest 100 and taking out the coveted J Award for Best Australian Album, they then chalked up an incredible 8 x ARIA Award nominations, winning Best Breakthrough Artist. With 1.6 million monthly listeners and upwards of 257 million streams on Spotify, over 22 million Apple Music streams and YouTube views at almost 15 million, Lime Cordiale show no signs of slowing down.

Always high octane and with a live performance the stuff of legend, Lime Cordiale are not to be missed! Grab your tickets now. 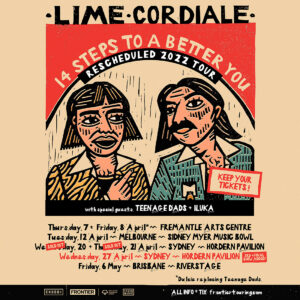 Stay Connected With Black of Hearts