WITH “THE WORLD REPEATS

THE BEST OF ESKIMO JOE”

Since their formation in 1997, Eskimo Joe have remained a quintessential part within the Australian music scene. While always stating true to their roots, Eskimo Joes have had an incredible amount of commercial success. Releasing 6 studio albums and amassing sales of over 750,000, with 3 of these albums debuting ta number 1 on the ARIA charts. Juggernaut “Black Fingernails, Red Wine” lasted 62 weeks in the ARIA Top 50 Chart and “Foreign Land”, from their fourth album ‘Inshalla’, brought home 2 APRA Awards, for Most Played Rock Song on Australian radio and Best Rock Song of 2010. The band return once again after performing at the 2021 AFL Grand Final, with a collection of all of their greatest and most renown hits titled ‘The World Repeats Itself Somehow – The Best Of Eskimo Joe’. Pre-order/Pre-save the album HERE.

The album features all of the bands greatest hits, featuring nationally beloved tracks like 2006’s triple j’s Hottest 100 #2 “Black Fingernails, Red Wine”, number 12 ARIA chart ranked “Sarah” and the certified gold “Foreign Land”. With the band’s incredible career and nationally acclaimed status it wasn’t hard at all for them to form a collection of songs that the Australian public already adore. The album features songs that span across their entire career, featuring tracks from their early EP ‘Sweater’ (1998) all the way to include music from their more recent catalogue with features from ‘Ghost Of The Past’ (2011).

Eskimo Joe have amassed 35 ARIA nominations in their career thus far – a number only surpassed by Silverchair, Powderfinger, Kylie Minogue and John Farnham. They have brought home 3 International Song-writing Awards, 11 WAMi Awards and 8 ARIAs and 11 of their compositions have featured in triple j’s Hottest 100 countdown.

The stage however, is where Eskimo Joe shine, key performances include Sound Relief, Live Earth, Make Poverty History, the ARIA Awards, The APRA Awards, Big Day Out, Homebake, Laneway Festival, Falls Festival, Southbound, Splendour In The Grass, triple j’s One Night Stand, The Australian Open, AFL and Sundance Film Festival in Utah, USA, on the same stage as Crosby, Stills, Nash and Young. Along with a significant number of tours within Australia, the band have had their music released to great acclaim from fans and critics alike, in the United States, Canada, Europe and Korea with large festivals and sold-out tours to boot… They were along the number one ticket holder for the Fremantle Football Club for two years running!

Eskimo Joe continue to captivate their large and devout fan base by pursuing new horizons and embarking on new challenges. The band began celebrations for their 21stbirthday in 2018 by embarking on a national tour featuring they Sydney, Tasmanian, West Australian and Camerata (Queensland’s Chamber) Orchestrasand more recently provided a packed Optus Stadium in Perth with pre-game entertainment before the NRL State Of Origin, plus a very special show at Freo Social where they played ‘Black Fingernails, Red Wine’ in its entirety.

With a national tour in support of the legendary Jimmy Barnes and a reunion show with the West Australian Symphony Orchestra in Kings Park at the end of 2019, along with the back catalogue vinyl re-releases (‘Girl’, ‘Ghosts Of The Past’, ‘Inshalla’, ‘Black Fingernails, Red Wine’ and ‘A Song Is A City’ re-releases available now) the anniversary weas a great success. Most recently, Eskimo Joe performed at the 2021 AFL Grand Final, which was a once in a lifetime experience being hosted at Perth’s Optus Stadium! Watch the performance HERE.

Eskimo Joe released “Say Something”, their first new single since 2012, globally to critical acclaim on June 26th 2020. “Say Something” reached number 1 most played on Triple M and 11th most played song on the Australian Airplay charts and won 2nd place in the rock category of the International Song-writing Competition. “Their new single sees them refreshed and more powerful than ever, with frontman Kavyen Temperley describing the song as ‘a call to act with humanity, without prejudice or violence towards each other or the plant’” – Rolling Stone. A further brand new single “99 Ways” was also released on February 12th 2021.

Eskimo Joe also welcome the release of ‘The World Repeats Itself Somehow – The Best Of Eskimo Joe’ with an exiting run of tour dates in 2022. The band offers fans the chance to hear two of their biggest album, ‘A Song Is A City’ and ‘Black Fingernails, Red Wine’, in their complete form. Tickets and further tour information can be found at: frontiertouring.com/eskimojoe. 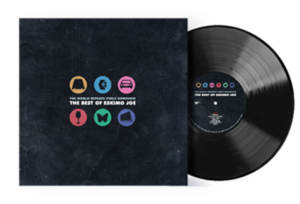