Australian-born, LA-based actor and musician Nicholas Hamilton has today released his sparkling new single In Line, a song about coming of age that was two years in the making, out today !  As a young actor and musician, Nicholas took the plunge and moved from his home in Byron Bay to Los Angeles.  As an actor he has starred alongside Nicole Kidman, Joseph Fiennes, Hugo Weaving and Jessica Chastain to name a few, and has an ever-growing list of successful films under his belt, including roles in global blockbusters such as It, It: Chapter Two, Captain Fantastic, Strangerlandand more.

In Line is evocative of Elle King – it’s modern pop but with a slightly retro twist that feels perfectly unique to Nicholas Hamilton.  There’s plenty of room in this expert arrangement for Nicholas’ voice to soar – and it’s that voice that takes centre stage even as the beat ramps up and the chorus fills out.  Written alongside Ben Kuhl and produced by Arthur Pingrey (Sia, Karen O), this track is expressive, emotive, and it feels appropriate for the subject matter as Nicholas explains, “I wrote this song just after I moved to the US.  It’s all too fitting, as the song is about how I felt before and after getting on that plane to come over to the States and start my independent, adult life.  I was battling my own headstrong decisions about making that leap and leaving my family, friends and childhood behind.  The whole track is me singing to my brain, which was something I didn’t lean into until later on in the writing process.”

Nicholas Hamilton’s influences are eclectic, as he explains, “I listen to a ton of chill pop, similar to what I write. People like Quinn XCII, Jordan Mackampa, Ruel…but I grew up listening to Mum and Dad’s musical tastes.  I remember driving with my Dad to football practice on Tuesdays and Thursdays and listening to The Eagles and Cat Stevens, or driving up the coast to my extended family with my Mum and listening to Kenny Rogers and Charley Pride.”  These varied influences shine through in this layered release, and Nicholas’ deep passion for music is clearly evident when he discusses his craft.

After a year like no other, Nicholas has returned to Australia just in time (he’s currently sitting in Hotel Quarantine) to celebrate the release of In Line, a song about his life-changing move to America when he was just 18 years old.  It feels like a full circle moment, as he says, “I haven’t been home since Covid, so I’m very excited to be back. The idea of releasing a song that I wrote about moving from Australia to the US, as I’m returning to Oz, is an opportunity I’d be silly to pass up.  It just feels right, it makes me comfy.” 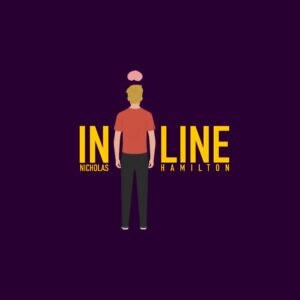