Listen to ‘Boy Bye’ via your preferred streaming service here

Exuding her trademark satirical tendencies, ‘Boy Bye’ sees Lauran Hibberd continue to paint vivid lyrical pictures with her tongue-in-cheek songwriting, and then bring them to life with anthemic instrumentation. Blurring the lines between indie, grunge and bubble gum pop, the exuberant new track honours ‘90s rock sensibilities and pairs crunchy riffs with an infectious and expansive hook. Having teamed up with esteemed producer Suzy Shinn (Weezer, Panic! At The Disco, Fall Out Boy) during lockdown, ‘Boy Bye’ is the first product of a transatlantic recording partnership between the two.

Detailing her rousing latest effort, Hibberd explained “‘Boy Bye’ IS co-dependency, it has a scarily obsessive nature about it and is based on the need to ‘feed’ someone to keep them around. I sort of battle with myself throughout the whole track, the same way you would in your brain when stuff like this happens and you try and justify it to yourself. There’s an odd strength in it though, and I think it’s noticing it and being able to say it out loud that gives it that balls to the wall sort of ‘get lost’ momentum. Also BYE BOYSSSS!!!!” 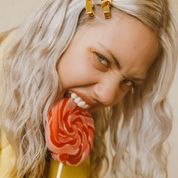 Isle of Wight native Lauran Hibbard has captured hearts and minds with her authentic and irreverent songwriting. Since her breakout in 2018, she has released a string of cheeky and undeniably cool singles including ‘Hoochie’, ‘Sugardaddy’ and this year’s ‘Old Nudes’, which charismatically divulge sarcastic social commentary and more intimate struggles equally. Lauran performed at Glastonbury Festival in 2019, and has drawn praise from international music beacons including BBC Radio 1, Billboard, NMEand The Line of Best Fit.