“THE VIEW FROM HERE”

Melbourne musical mastermind Lalchand today shares soaring new single “The View From Here” featuring Garrett Russell of Silent Planet and Liam Guinane of Reside. The single is the title track from forthcoming feature-filled EP, to be released Friday October 8.
Produced, mixed and mastered by Sam Bianco (Parkwood), the ambitious double feature track is about finding beauty in hindsight. Lalchand explains: “I was highly inspired by the band Deadlights at the time and wrote this song along with my old band mate Ben.”
“I remember this song being one of the most fun to write, the ideas flowed out pretty naturally. The lyrics were written by Ben and is about coming out of a dark time and appreciating the journey of growing and becoming stronger through experiences both good and bad. Sometimes we feel hopeless however when we look back at where we were and where we are now, we can see beauty through the trials and tribulations.“
Lalchand is the solo project of Jordan Lalchand, who began his musical journey playing in Shepherd (formerly known as Maker Resonate) with many accolades to show including winning BANG’s Battle Of The Bands in 2017, taking one of eight spots in the GRID (Grass Roots Indie Development) series program and has shared the stage with the likes of Ocean Grove, Alpha Wolf and The Getaway Plan.
Lalchand shared “Feast” feat. Ryan Wilson as his solo debut in 2019 which was described by triple j Unearthed‘s Dave Ruby Howe as “both hard yet soaring” and The Soundcheck drew comparison to a couple of Australia’s finest, “Feast at times calls to mind fellow Aussie prog kings Dead Letter Circus and Karnivool – but with Lalchand’s own unique twist”.
“Imposter Syndrome” feat. James Butler of Slow Talk followed in 2020, where Depth Mag praised its driving undertones: “‘Imposter Syndrome’ immediately oozes determination from its opening riff, which captures the persistent drive to create that pushes many creative people forward.”
“The View From Here” lands as the third offering from the forthcoming EP of the same name, and holds promise for what’s to come. “The View From Here”, “Imposter Syndrome” and “Feast” are out now and available to stream everywhere. ‘The View From Here‘ EP can be pre-saved at https://ffm.to/theviewfromhereep. 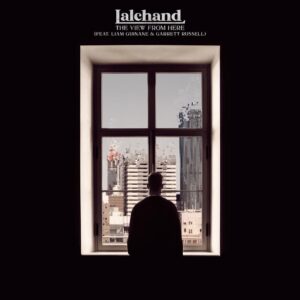