Sydney electronic producer, DJ and songwriter Karmel Jager has announced her latest venture, her new EP “Your Love.” The EP opens with the title track, “Your Love,” with luscious vocals and dreamy pads that progress throughout this warm analogue style house track,with all the unexpected twists and turns that we’ve come to expect from this budding artist.

LISTEN TO “YOUR LOVE” EP HERE.

“This song is about that feeling of being so in love you feel like you don’t have any control over yourself anymore..when you’ve completely given yourself over to someone, and you’re so completely under love’s spell, that there’s nothing you can do to be free of it,” said Karmel Jager.

“I actually wrote the song whilst out on tour as a classical singer. I remember I was sitting in  a car as we were being driven between locations, and the words of this song came to me and I immediately  wrote them down in my notebook. I didn’t make any edits from what I wrote and I even drew up some manuscript paper quickly and jotted down what I heard in my head so I wouldn’t forget the melody!”

Originally a professional classical singer, Karmel honed her craft at the Sydney Conservatorium and the Guildhall School of Music and Drama in London. Based in the UK for three years, she performed as a classical singer throughout Europe, and recorded extensively as a session singer at AIR and Abbey Road Studios, appearing on soundtracks for films, tv and video games, including the likes of BBC’s Sherlock, The Avengers, Star Wars and World of Warcraft.

Karmel moved from London back to her hometown of Sydney in 2017. Transitioning from classical to electronic music, Karmel released her debut self-produced track in 2018 and began DJ-ing in early 2019. Karmel has been honing her production skills alongside building her DJ career, releasing a second track “Trafalgar Square” in 2019, which was praised by Purple Sneakers, Women In Pop, Culture Eater, LeFutureWave and more.

Thanks to her diverse musical background, Karmel finds it difficult to stick to one genre, and as a DJ plays deep house, house, minimal, progressive, techno and Rn’B. Over the past year she has been performing regularly at Sydney club nights including Sunday Service, Undisclosed (Goodbar), This is Living, Gigs in the Garden (The Roundhouse), Birdcage (Slyfox) and Tokyo Sing Song.

“‘Trafalgar Square’ is the next step in Jäger’s impressive career, showcasing her as one of the most accomplished new talents releasing music in 2019.” – Women In Pop

“Jäger is resolute in her craft, forging a new identity that slots perfectly into the electronic-dance scene.” – Artist 1 on 1

“Your Love” EP is available on all platforms now. 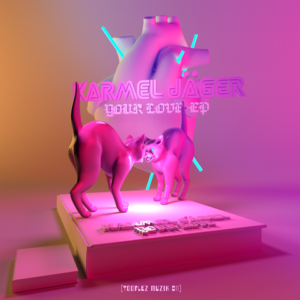