AWAY – OUT FRIDAY 13 NOVEMBER

Two local powerhouses Josh Teskey (lead singer, The Teskey Brothers) and Ash Grunwald have teamed up for Push The Blues Away (out Friday 13 November) – an album born out of a mutual love for the blues and a genuine appreciation for each other’s talents.

Following the release of first single ‘Thinking ‘Bout Myself’ comes the touching ‘Hungry Heart’ – a striking love letter penned by Josh Teskey and an emotional highlight of the album.

Josh Teskey says of the track:

“After spending many years running away, attempting to push the blues away, ‘Hungry Heart’ is the happy ending, the moment when I stopped running away and found and accepted love. The song is basically the story of spending your whole life searching for love and finding it. The hungry heart is fed! I dedicate this song to my incredible life partner Hannah and our daughter Ayva”.
Ash Grunwald says of the track:
“One of the many things that Josh has bought to this album is light and optimism that comes with those really nice major keys melodies, it’s much needed on this album I think because a lot of the stuff I bring to the table is very much in a minor key and sad blues, but the two tracks Josh has bought bring the folky lighter flavours and ‘Hungry Heart’ almost has a slight old school gospel flavour paired with the folky acoustic blues stylings it’s perfect.”

On Push The Blues Away, two of Australia’s most captivating vocalists, Josh Teskey and Ash Grunwald, come together to cast off the weight of expectation and revel in music’s most simple pleasures. Recorded entirely live and straight to tape, with their only percussion consisting of gospel inspired hand claps and stomps, the pair laid down seven original tunes, some penned by Josh, some by Ash, along with two classic Blues covers, Son House’s ‘Preachin’ Blues’ and the song that kickstarted the whole project, ‘The Sky Is Crying.’ To help them achieve this vision, they enlisted the help of Josh’s brother, Teskey Brothers’ guitarist, vocalist and Grammy-nominated engineer, Sam Teskey on production duty. Being a mastermind of analogue recording techniques, Sam knew how to capture a vibe above all else and for five days the three of them holed up at The Teskeys’ studio in Warrandyte in regional Victoria writing and recording what would become Push The Blues Away.

Both artists have had an extremely busy 12 months; renowned as one of Australia’s finest live performers, Ash Grunwald released his critically acclaimed new album MOJO along with his first book, “Surf By Day, Jam By Night” whilst The Teskey Brothers followed up their ARIA Award-winning and Grammy nominated second album Run Home Slow with the 2020 release of Live At Forum, earning them their first ARIA chart #1.

Push The Blues Away will be released through Ivy League Records on Friday 13 November on 180g, cream-coloured vinyl, CD digipak and all digital services. To celebrate, the first single ‘Thinking ‘Bout Myself’ is out everywhere now, following its debut via an incredible performance on ABC’S The Sound. 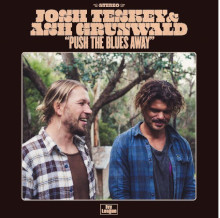