Sydney cult heroes Johnny Hunter have today announced their first national headline tour, which will see them play nine dates around the country in July. The shows will celebrate the release of the four-piece’s highly-anticipated debut album Want, out 24 June via Cooking Vinyl Australia.

Tickets are on sale HERE. Pre-order the album HERE.

Renowned for their raucous performance style, Johnny Hunter will kick off the Want tour on the Gold Coast at Vinnies Dive on Friday 1 July, before making their way down the East Coast via Brisbane and Newcastle. The post-punk powerhouses will settle in for a hometown gig at Sydney’s beloved Oxford Art Factory, before touching down in Adelaide for the first time. They’ll continue with stops in Melbourne and Perth before wrapping up in Hobart – another first appearance. The tour comes off-the-back of the band’s double residency, which saw them fill Sydney’s Botany View Hotel and Melbourne’s Old Bar twice a week throughout March.

Emboldened by life’s uncertainties, Johnny Hunter’s forthcoming debut Want is a reminder that we all share what it is to be human, and must embrace our whole selves on the journey to self-actualisation. “Every song is a challenge we faced as a band and as individuals in realising who Johnny Hunter is and ultimately who we truly are”, shares frontman Nick Hutt. Produced by Jack Moffitt (The Preatures) and mixed by critically acclaimed engineer Adam Greenspan (IDLES, Yeah Yeah Yeahs, Nick Cave & The Bad Seeds), Want reimagines the sound of new wave and new romantics for the 21st century, fusing them into a surging 10-tracks that are as poetic as they are anthemic; as ferocious as they are vulnerable.

From the cathartic ‘Life’ to darkly hypnotic ‘The Floor’ or thunderous ‘Clover’, the theme of human connection underscores the entire album. “No matter how different we may seem…unbeknownst to what it is we want, we have all been naive, we have all strived to find our version of life, we all fear change, fear sadness, all amidst our own collective fading eternity.”

Rousing the listener to confront the inevitability of change head on, the most recent single ‘Dreams’ was featured across Best New Music lists and single reviews from the likes of Atwood Magazine, Earmilk, Purple Sneakers, Music Feeds and Ticketmaster AU. The track has been added to rotation on 2SER, and received airplay across 2XX, 4ZZZ, 979fm, FBi Radio, Radio Adelaide, triple j and triple j Unearthed to name a few.

Since emerging from the shadows of Sydney’s grim nightlife in 2019, Johnny Hunter have quickly risen to underground cult favourites, selling out rooms across Australia’s East Coast and winning audiences over supporting the likes of Jack White and The Saboteurs, City Calm Down and Polish Club to name a few. Their debut EP Early Trauma (2020) garnered critical praise and airplay around the country, citing influences and drawing comparisons to The Smiths, Joy Division and The Cure. Though their sound is rooted in nostalgia, their furiously honest songwriting and explosive live shows are undeniably made for now. 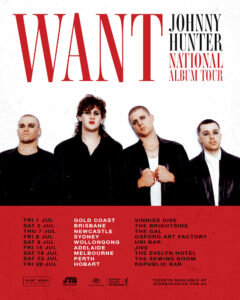 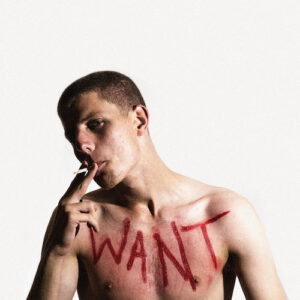