After his electrifying, politically-charged and compelling debut, ‘I Can’t Breathe‘, and surveying the hurt of racial stereotypes on the contemplative second single, ‘Mikey Might‘, Jerome takes his dexterous, genre-melding sound to comparatively lighter and poppier ends on just his third solo single to date. Self-assured and justified in its own saltiness, ‘Vibrate’ addresses an ex-lover, reveling in the satisfaction that comes from having moved onto something better while the other has stayed in the same place. On ‘Vibrate’, as always, Farah is chasing honesty both through and within his music, whether that’s speaking to police brutality, the hurt of racial stereotypes or a spurned ex.

Mixing looped, chanting vocals with his free-ranging flow and an insistent instrumental, ‘Vibrate’ demonstrates that Jerome plans to approach his career with the same boundaryless attitude with which he produces and writes his own music, having covered more artistic ground and taken more surprising-but-profitable risks in this opening stanza than most artists his age. Completing the release is the music video, shot during Stage 4 lockdown in Melbourne with the help of just one other person – watch BELOW.

Prior to stepping into the spotlight as one of Australian music’s breakout stars of 2020, the 27-year-old Jerome Farah was an APRA-Award winning, ARIA nominated songwriter and a much-sought-after collaborator, having previously worked with Tash Sultana on ‘Willow Tree‘, Baker Boy (‘Marryuna‘, ‘Mr La-Di-Da-Di‘, ‘Meditjin‘), KIAN on ‘Waiting‘, Tkay Maidza’s ‘You Sad‘, plus Adrian Eagle and Dallas Woods. A stylistic polymath, Jerome’s fusion of neo-soul, R&B and alternative rap threads together styles and influences informed by his multicultural upbringing.

‘Vibrate’ by Jerome Farah is out now, buy/stream it here. 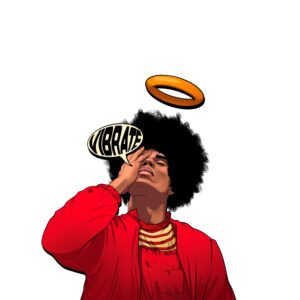