FROM HER FORTHCOMING EP

LA based DJ and producer, J. Worra delivers another bouncy club record, ‘Chunk Funk’ as she continues to evolve her sound. As the title suggests, the new track is a funk-filled house single, which gives nods to the relentless grooves from Chicago house and jackin’ house styles, and builds in intensity throughout. To give the track light and dark moments, the talented artist adds in two sampled vocals, one which is totally soulful and the other sounds almost robotic.

J. Worra talks about the inspiration behind this track, “I was listening to a lot of Moodyman sets when I made that track, I think one of them was from a roller rink disco set he played. Then I sampled a voice memo my girlfriend recorded for me. It’s so cool how this record came together and I love that it sounds different from a lot of records out there right now.”

J. Worra has had an impressive career to date, earning recognition from tastemaker outlets across the globe, Insomniac, DJ Mag and Mixmag. Her skills as a DJ, and talent in the studio have secured releases on noteworthy labels Realm, Techne, Thrive, Mau5trap, Insomniac’s In/Rotation & Dirtybird, plus landed her official remixes for Kaskade, Deadmau5, GRiZ, Felix Cartal and Kyle Watson. With her EP landing on Club Sweat later this year, J. Worra continues to release a steady stream of stand-out club tracks, and just announced 27 US show dates throughout the rest of 2021. 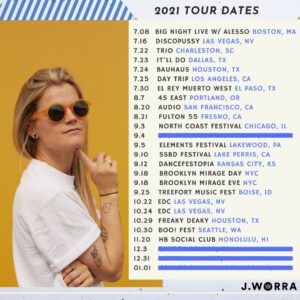