“WYWFM is a modern emo jam with all the vocal melodies you could want and a and half-time chorus you know you’ll be singing along in the front row of a show.”
Maniacs (AUS)

Following on from their release of ‘Flower’, Sydney-based post-hardcore group Isotopes have just revealed their poignant new single ‘WYWFM’ – produced by Stevie Knight (Stand Atlantic, Yours Truly, Between You and Me) and mixed by James Paul Wisner (Paramore, Underoath).

‘WYWFM’ launches with a sweeping texture of imperious drums, soaring guitars and vivid piano before the resolute vocals of frontman Justin Miller direct the song’s eloquent melody. Intricate harmonies and instrumentation guide the song to its anthemic chorus, widespread with elevating chords and impassioned lyrics. The band’s chemistry is highlighted with complex rhythmic techniques and dextrous song writing, while the track’s message stresses one of life’s dilemmas.

Alongside the release of the track is the glamorous accompanying music video – directed and produced by Chris Elder of HausParty (Polaris, In Hearts Wake, Northlane). Shot in Sydney’s Marble Bar, the video focuses on the narrative of lust-guided temptation while the band performs the song in polished outfits. The sophisticated plot follows two characters searching for love before watching everything fade out of view during the song’s climax.

Miller talks about the meaning behind ‘WYWFM’:

“’WYWFM’ is about realising the path of chasing love always leads to heartbreak, so for the first time you’re putting love aside and somewhat asking that it waits for you whilst you choose yourself. The concept of the video is about lust/love/temptation. A game of cat and mouse accompanying these feelings. Finding that once you obtain all of these feelings that you’ve ever so been craving, it disappears; you’re calm, you’re alone. So, was it ever really there?”

WYWFM is out now. Official artwork below 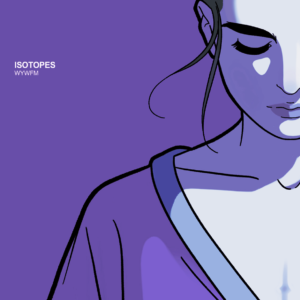 Previous singles from Isotopes have been widely embraced by the likes of Spotify, Apple Music, RockSound (UK), Alternative Press (USA), Discover Magazine (USA) and Music Feeds. The band have seen further support from triple j, triple j Unearthed, 3RRR, PBS, and The Faction, where their latest single ‘Flower’ was voted in at #61 in the Hardest 100.

Isotopes have been a pivotal dynamism in Australia’s heavy music scene, known for their diverse mix of melodic-punk and hardcore elements. Since their inception, they have toured and played live shows relentlessly, travelling internationally to Japan, and domestically sharing stages with Windwaker, Ocean Sleeper, Sienna Skies, Days of Deceit, and The Brave.