Produced and engineered by Stevie Knight at Electric Sun Studios (Northlane, Between You & Me, Tonight Alive), “Flower” demonstrates the polished melodic metal sound that ISOTOPES has mastered and built a foundation on. Featuring a hard-hitting driving force that carries the track throughout and a catchy chorus that will make a home in your brainspace.

Vocalist Justin Miller ‘Millsy’ explains that: “‘Flower’ is about the instant feeling of falling in love, although you feel it won’t last because you still have to face all of your own burdens – you find it more perfect to just die in that moment in order to capture it.“

Miller also adds that: “‘Flower’ has the standard ISOTOPES formula that makes you want to sing along at the top of your lungs whilst feeling every bit of emotion at the same time. We took to a heap of pop punk bands we all love for influence to create something different to our previous releases.”

SOTOPES is Justin Miller ‘Millsy’ (vocals), Joshua Wood (vocals/guitar), Hamish Gibson (drums), and Bradley Stokes (vocals/guitar). Together the four-piece have embraced the mix of emo/feelsy music and melodic metal in a pursuit to carve out a unique place for themselves in the alternative rock genre. ISOTOPES have made a name for themselves by crafting a sound that portrays an expression of personal emotion and honesty against a backdrop of catchy choruses and mesmerisingly hard-hitting riffs.

ISOTOPES have achieved a string of successes leading up to the release of “Flower”. The bands second EP, ‘Fractures‘ charted at #2 on the iTunes Metal Charts, and #23 on the overall charts on release. The leading single, “RIP“, features Bradley Walden of Emarosa, and also sees the likes of Thousand Below vocalist, James DeBerg featured on the soaring fourth track, “Dead Soul“.

‘Fractures’ recently hit the Spotify milestone of over 1 million streams, with the official music video for their earlier single “Poisoned Autumn” reaching over 1.5 million views on YouTube. 2019 saw the group’s first international tour to Japan in support of Japanese metalcore band ‘Sailing Before The Wind’.

ISOTOPES show no sign of slowing down, with plenty on the horizon for 2021. For now – “Flower” is out now and available on streaming platforms everywhere. 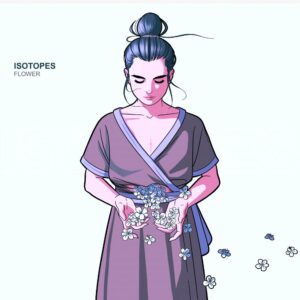