‘THE SUN SLEEPS AS IF

Fresh from a string of US signings including Hollow Front, Vatican, Sleep Waker and Moodring, UNFD is now pleased to welcome fellow US heavy mainstays Invent Animateto the roster.

This signing news is bolstered by the announce of the band’s new EP The  Sun Sleeps, As If It Never Was and the reveal of its first single ‘The Sun Sleeps’. Out in full September 23, the EP finds Invent Animate opening up a powerful discourse on the ricochet effect of trauma and addiction.

Searingly close to drummer Trey Celaya and his family’s story navigating a drug addiction crisis, it comprises a one-two punch of songs describing both perspectives of this tragic and deeply painful scenario. The first track, today’s ‘The Sun Sleeps’ sheds light on the story from the perspective of the drug affected, meanwhile the accompanying ‘As If It Never Was’ explores the view of those left reeling in the sphere of impact of drug addiction.

Speaking of ‘The Sun Sleeps’, Trey shares: “We wanted to explore both sides of a deeply painful situation, and to draw out how nuanced and weird and difficult these things can be.

“I think people are learning in the modern day it’s not as simple as ‘this is just a bad person, and they were addicted to drugs and they did it to themselves’, there’s always a string of trauma and things that are not dealt with and stigmatised mental health that sets off a spiral. Even if one person is clearly in the wrong, it doesn’t exempt them from being a victim in another sense.”

Speaking conceptually of the EP as a whole, he adds: “Despite all attempts to keep our darker reality shadowed in secrecy, there comes a moment in time when the truth can no longer be hidden behind closed doors or empty excuses. And at once, everything is revealed, as if the Light is a constant law of nature laying bare the secrets we believe are ours to keep. In this infinite moment, the bond shared between two loved ones is severed. The flow of time does not wash away the scars, it only immortalises what is suspended in the balance – the pain of loss, the gift of hindsight, and the curse of hope. What will always be a memory. This EP is a true story of addiction and the trauma that lies in its aftermath of a secret too dark to be hidden.”

About Invent Animate:
Amid a generation gripped by loneliness, fear, and a desperate concern for the state of the world, Invent Animate are grabbing fans by the hand and choosing to walk with them.

There’s a sense of duty among the band – comprising vocalist Marcus Vik, bassist Caleb Sherradan, drummer Trey Celaya and guitarist Keaton Goldwire – to bare their own pain and tragedy for their listeners, indeed creating a safe, familiar place for listeners to process their own. It’s this deeply empathic and concerned approach to their output that sets Invent Animate apart, and has seen the band develop a close knit, cult-like following over their 10+ years together.

“I think what’s really important to our generation of music consumers is finding something beautiful out of all the chaos,” shares bassist Caleb. “It’s important to us – we’ve got a lot on our plate, life is weird, life is hard – but we’ve come to understand how important it is as artists to be there with our listener, to be vulnerable ourselves so they might be able to say, ‘thank you, you guys helped me articulate this’ or, ‘you guys helped me walk through this journey’ because of what we’ve created.”

Stationed across Texas, Colorado and Sweden (following Vik’s recruitment in 2019), Invent Animate are now in prime position to break new ground on their new label address. Now rubbing shoulders alongside a plethora of previous touring partners including Silent Planet and ERRA, and Spotify “sounds like” mates such as Like Moths To Flames, Void Of Vision and Thornhill, the four-piece perfectly complement the UNFD roster with their blend of ambient metalcore, djent and prog.

Invent Animate release The Sun Sleeps, As If It Never Was on September 23.

INVENT ANIMATE // THE SUN SLEEPS, AS IF IT NEVER WAS
OUT SEPT 23 VIA UNFD OFFICIAL SINGLE ARTWORK BELOW 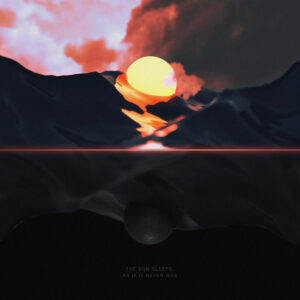 Stay Connected With The Black Of Hearts