KEANU AND HIS NEW SINGLE

‘I’VE THOUGHT ABOUT IT’

Soul Modern introduces the new Alternative Soul Pop artist Keanu and his new track ‘I’ve Thought About It’. Keanu is an artist making groove-fuelled expressive alternative soul music with past releases ‘Smooth’ and ‘Peaches’introducing us to the Sydney based musician. Keanu creates music in a similar vein to The Weeknd, John Mayer and Sampha with a playful spin and this new track exemplifies these influences. The new track from Niuean-Italian artist is an upbeat funky song that includes sultry samples of a phone call with a new love as well as the anxiety and troubles that come with a new relationship. All this mixed in with Benny-Sings-esque falsetto, piano syncopation and John Mayer inspired guitar lines done by friend and collaborator Yianni Adams from KYOSHI, make this new song from Keanu hard to miss, and a must listen.

The track is described by Keanu as being written during a rocky period with his current partner “I wrote ‘I’ve Thought About It’ at a time where my current girlfriend and I were best friends and only that. I had feelings for her but she never felt the same and it got to the point where I decided to try and distance myself from her. During that time, I really tried to get over these feelings, so I wrote this song. There was so much going through my head and so many questions I was asking myself, the main one being “why?”  The verses are purely how I felt about her and our friendship, while the chorus is me telling her directly. The song was very spontaneous, which was probably because I had so much to say and so it just poured out of me really fast.”

Keanu is a 23 year old singer, songwriter, producer and multi instrumentalist of Italian and Niuean heritage from Balmain, Sydney. Keanu started his music journey at the age of 8 years old, where he first began playing the trumpet, from which his love for music and creation only grew. Over the years Keanu has continued to develop his musicality, learning the drums and piano, as well as developing his vocal versatility in the soul and r&b genre, through influences from the likes of John Mayer, Sampha and The Weeknd.

Keanu’s single ‘I’ve Thought About It’ is out now, via Soul Modern. 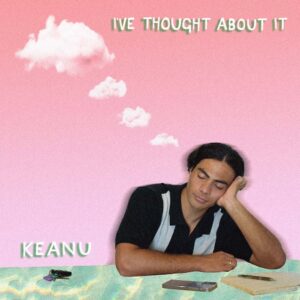 Buy/stream: Keanu – I’ve Thought About It