PROJECT WITHOUT A SMILE​

Billboard-charting, acclaimed rapper Dougie F releases his highly anticipated new project Without A Smile via STRAGG Records. Providing six string-of-smashes with production from Marzi, WondaGurl, & Mike Zombie, the project chronicles the heartfelt, transformative experiences Dougie endured and has overcome amid harsh realities growing up as a child. Moreover, the project magnifies his mentality behind the rise out of the 108 projects. Without Out Smile arrives as part one of an installment.

The release is herald by the premiere of his track “Beast,” featuring fellow NJ native TSU Surf, which was praised by HipHopDx, The Source and more. Earlier this week Travis Scott’s .WAV Radio premiered a short preview of another track from Dougie’s studio effort “Luka.” After the tease, the track later sent social media into a frenzy— increasing global anticipation for today’s heavy-hitting release. 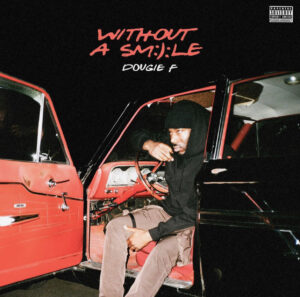 Not only is Dougie F a leader to his STRAGG Records (Self-Trained, Respected, Assertive, Global Grinder) imprint, he’s been able to maintain his independence through various successful phases of his career. Weather it’s his long-standing affiliation with Cactus Jack, touring with Travis Scott from his Rodeo days, to his own Billboard Top 40 charting single ‘On Purpose’ featuring Mr. Worldwide, Pitbull, to initially breaking out with historically one of the biggest Jersey club records of all-time ‘Back Up On It’ co-signed by Diplo, and his ‘Homegirl’ slow-jam single & tour with KYLE, Dougie is a shining example of the necessary hustle behind remaining culturally relevant while remaining in charge. An especially important conversation in today’s climate.

From the no-net hoops and empty pool scenes at ​108 Projects ​in Orange, NJ a young Dougie grew up listening to Kanye West, Drake and J.Cole to hone his freestyle craft as his escape from the otherwise likely possibilities and harsh realities of a project-life upbringing. In college, Dougie F’s self-determination and hyper-focus led to finessing an opportunity to open for ​Rick Ross ​and ​Jadakiss performing tracks he made in the wee hours of the night with his then roommate/producer, the overwhelming crowd reaction inspired him to drop out of school and launch his music career.