HALF ME – encompassed by guitarists Chris and Julius, vocalist Chris, drummer Max and bassist Tobias – are one of the newest additions to the Arising Empire roster. Hailing from Hamburg, Germany, the metalcore five piece was founded in October 2018 after the demise of each others local bands.

In two years time, the band has been able to make an impact in the music scene by self producing music and videos to display their intensive and energetic demeanor. Debuting with four singles to start, It was their latest single ‘Exitwound’ (featuring Jack Bergin of VOID OF VISION) that gave the group a breakthrough and landed the band in the spotlight of KNOTFEST’s “Countdown to Oblivion”.

Now joining forces, Half Me drop their new single ‘Trauma Culture‘ in cooperation with Arising Empire.

“I am thrilled to finally share TRAUMA CULTURE and open the door to our new narrative. TRAUMA CULTURE represents relationship mania, a form of mental illness that is often overlooked for the extent of collective and individual damage dealt. Radical world views are colliding in this era of hypercommunication. Everything that happens around me has to do with me. And there is something I have to do to face this plot. Challenging the rules of society became a vessel of this dogma.  With TRAUMA CULTURE I process personal experiences as well as sociopolitical observations and I can’t wait to bring that hurt and sadness to the stage. While I condemn radicalization, I empathically care for the victims of isolation.” – Chris (Vocals)

Musically, the band blends a modern rendition of metal and hardcore with highlights of 90’s nu-metal. Pounding riffs and breakdowns are accompanied by brutal, yet sometimes elegant, vocals that all balance together to formulate the band’s own distinctive sound.

Riding the high of their recent success, Half Me has sights set on releasing their highly anticipated debut album in 2022 and are sure to make it worth the wait. 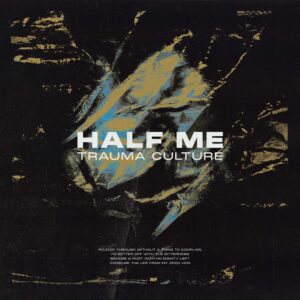