UK grime-metal quintet Hacktivist have announced their eagerly anticipated new album, Hyperdialect, due for release on Friday June 18 via UNFD. Today’s announce comes alongside the release of a video for their brand new single ‘Planet Zero’. Check it out below.

Co-vocalist J. Hurley comments: “Look at the state of the planet at the moment and people are still ignoring it. It doesn’t make sense. There are all these homeless people on the streets, but there’s all this land and enough food to go around for everyone.”

Co-vocalist Jot Maxi adds: “There are so many things wrong with the way humanity is. We’re self-destructive and everybody knows it. It’s in a lot of films, especially in science fiction. But that dark future is no longer fiction and it’s very clear that we’re on a downwards path. If I buy a bottle of something to drink, it’s going to be sold in plastic and I’m going to feel guilt about that. Take a look at any city around the world – there’s so much opulence and grandeur on show, but look closely enough and you’ll find people living on the streets, homeless. Where is this going? There are islands of plastic bottles in the sea now, but we only have this one planet. It’s mad. It’s all tilting downwards, and into the mouth’s of the rich.”

The news of Hyperdialect follows Hacktivist’s exhilarating return in 2020 with their single ‘Armoured Core’, featuring rising artist Kid Bookie, which saw support from Radio 1’s Future Artists with Jack Saunders, the Radio 1 Rock Show, Kerrang! Radio and more. Meanwhile, Hacktivist will bring Hyperdialect to life on stage later this year, having been confirmed to appear at UK festivals RADAR Festival in July, Bloodstock in August and Slam Dunk Festival in September, with more dates to follow.

Question everything. Consider your sources. Be wary of ulterior motives, insidious media narratives and even your own unconscious bias. Trust sparingly and try to make smart, informed choices. As the world slides further into ruin at the behest of old, rich white men ruling with catastrophic, zero-sum thinking, it’s more important than ever to be vigilant and fight back against the forces that be who seem hell-bent on creating a dystopian future for us all.

Luckily, Hacktivist are back to help cut through the noise and bullshit, tooled-up and ready to attack with renewed vigour and reinforced ranks; with Jot Maxi and J. Hurley now sharing the vocal and lyrical load, drummer Rich Hawking and bassist Josh Gurner bringing the beats and rhythms, and guitarist and production don James Hewitt fleshing out the group’s genre-fluid muscle, playing a very active role in Hacktivist’s writing and recording process and bringing a new and compelling dynamic to the table.

In 2016, when Hacktivist initially set sights on their enemies with debut album Outside The Box, the world wasn’t fully equipped to heed their warnings and pay attention to its timely rallying cries. They return into a very different one, however – a world that’s sadly now all-too-finely-attuned to the horrors they first forecasted four years ago. In the wake of a global pandemic that has sharpened collective senses and exposed the systematic flaws across society, these should be times primed and ready for the truth-bombs that Hacktivist are about to drop. But recent hardships only amplify the band’s messages – these dispatches from the edge were written way before a virus brought humanity to its knees.

If all of that sounds grim and miserable, fear not, because Hacktivist aren’t here for unhelpful told-you-so’s or sensationalist scaremongering. What use would holding a mirror up to all of this ugliness be if there weren’t some lessons to learned from the reflection, or at least to offer even the faintest glimmers of hope?

“It’s becoming clear that we are on the brink of some type of revolution,” says Jot Maxi, with no small dose of conviction or optimism. “Hacktivist are here to bring truth and positivity – the silver lining of a society clouded in poisonous fear. Hacktivist also represents a voice that isn’t afraid of saying what needs to be said. We’re already living in the future. We have the choice to either be shaped by it or to stand up and shape it ourselves. Which path will you take?”

It was with those battle lines clearly drawn and ambitions duly set that Hacktivist entered into the creation of Hyperdialect. Starting almost two years ago and developing on the acerbic sonic filth introduced by 2019 singles ‘Reprogram’ and ‘Dogs Of War’, the five-piece felt fired up by their new working dynamic and the collective process involved, with each member actively encouraged to contribute ideas until the best outcome was reached. Unusually, for such a group of bloody-minded insurrectionists, this democratic approach worked wonders – a testament to how much they were all on the same page on these 12 tracks. Aside from guest spots from rapper Kid Bookie on the monstrous ‘Armoured Core’ and Betraying The Martyrs’ Aaron Matts lending his vocal talents to the title-track, this was all Hacktivist: no filter, no frills, and no holding back. 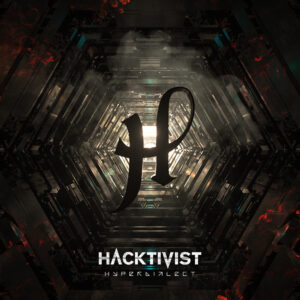