In a world first, Golden Robot Records have today announced ROCK THE VAX, an initiative to unite music lovers and inspire the rock public of Australia to go and get vaccinated in exchange for a free album (vinyl or CD) from the extensive Golden Robot Records (GRR) back catalogue, while stocks last.

From July 15 to July 31 2021, Australians are encouraged to email rockthevax@goldenrobotrecords.com with their digital certificate from the medicare app, along with their GRR album request and postal address.

“As the owner of a record label and a dedicated music lover, I just can’t sit back and watch a country I love have one of the lowest vax rates in the world,” impassions Mark Alexander-Erber, President and Founder of Golden Robot Global Entertainment. “The music industry has suffered terribly since the start of this pandemic, as many bands rely on touring for the majority of their income. COVID-19 caused touring to come to a grinding halt and vaccination seems to be the only way to bring normality back to touring and our lives. Bands need to tour to promote albums and album sales can be elevated by touring.”

Alexander-Erber has taken it upon himself to devise his own plan to boost vaccination numbers in Australia, and hence ROCK THE VAX was conceptualised. GRR is prepared to dip into their own pockets and give away what could very quickly become hundreds of thousands of dollars worth of stock over the next fortnight in order to encourage the rock community of Australia to get vaccinated as quickly as possible. And the GRR back catalogue is sprawling with everything from rock titles to country, to punk, to alternative. With albums by Rose Tattoo, Dizzy Reed (Guns N’ Roses), LA Guns, Jefferson Starship, Gilby Clarke (Guns N’ Roses), Horsehead, The Cherry Dolls, The Lockhearts, Steve Kilbey, David Campbell, MiSex, Toe to Toe, Groom Epoch, Kilby Kennedy, A New Revenge, Destinia, Hayley Jensen, Palace of the King, Reece Mastin, Glenn Shorrock sings The Little River Band and Nick Barker to name just a few artists, there is sure to be something of interest for everyone.

Alexander-Erber continues, “We did so well as a Nation to beat this horrid virus that affected so many in the community. But right now, we have to double and triple our vaccination efforts, so we can eventually (hopefully sooner rather than later) gain a sense of normality in our lives and not let it creep back into our community and cause ongoing lockdowns and inflict further pain and hardship. This latest Sydney lockdown for me was enough, I feel the need to act, as beating this virus is the most important thing right now and as an Australian company working on a global scale, I can see what is happening internationally and I believe people understand they need to get fully vaccinated eventually, but may just need an extra incentive to do it right now. There is no more time to waste, we need to avoid the risk of further lockdowns by getting vaccinated now!”

ROCK THE VAX (vaccination proof for album exchange via email submissions) is open from today, July 15 and will close at midnight on July 31, 2021. 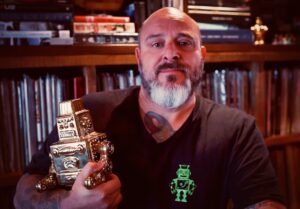