Treasured Aussie songwriter Jordan Wilson, of Georgia Fair, has today announced his debut solo single Totem, a moving piece of music reflective of both a past relationship and the sacred process of writing itself, out today.  Totem is accompanied by a sweet, nostalgic video, directed by Odin Umeofia.  In between launching his solo project and working on a new Georgia Fair record, Jordan is also set to release a book entitled Some Short, Some Long, in late 2021.

Produced by Daniel Lee Kendall, Totem is a contemplative track, to say the least.  It steps outside of the immediacy of heartbreak to analyse the sanctified act of songwriting as a healing process, as a reason, as a way to understand thoughts, actions, feelings.  Evocative of the brilliant songwriting of Aldous Harding and Mark Kozelek, Totem is a layered, masterful piece of music.  The gentle, comforting strumming of the acoustic guitar leaves plenty of space for Jordan’s understated yet undeniably moving voice to take centrestage – imploring the audience to really listen to the lyrics.

Speaking on the inspiration behind it, Jordan reflects, “This song is about a long relationship that ended pretty abruptly and quickly, and it created a real sense of loss and confusion in my life – but music helped to mitigate the void that it created, in some kind of way.  It helped me stay connected to something higher.  The idea is that the process of writing, and the song itself, is the Totem – something that you can use to hang on to and worship, so to speak.”

The video for Totem is brighter than one might think, after considering the subject matter of the song.  Highly saturated colours abound as Jordan dances somehow both with rigidity and serenity in a classically Australian backyard, complete with Hills Hoist clothesline and greyhound companion.

Despite its light exterior, though, there is a darkness to the clip too, as Jordan explains, “I came up with the concept with my brother Lavrence.  In the clip I am ripping out a bunch of pages from some classic literature – sort of showing the pursuit of self-discovery through the human language.  Then there’s a beautiful release where I string up all the pages on the Hills Hoist and ‘air it out’, so to speak…with the leaf blower.”

A deep thinker and creative soul to the core, Jordan Wilson is currently juggling his new solo project alongside album sessions with Georgia Fair and the upcoming release of his first book.  Some Short, Some Long will be released in late 2021 and includes several short stories, one longer story and poems with illustrations to match. 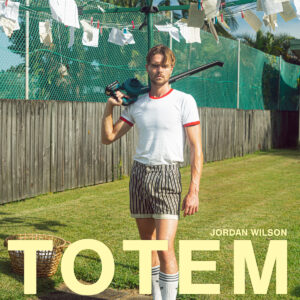