leads the next wave of Aussie pop with euphoric single

The solo project of esteemed songwriter

With over 50 million global songwriting streams, 180k+ streams on her last single ‘Kind of Bi’, 5.5k tiktok followers and major Spotify editorial playlisting success (Fresh Finds Pop Global, Fresh Finds AU) it’s fair to say Genes is the next wave of Aussie Pop. Her latest release ‘Crumble’ soars to effervescent highs, filled with all the vibrancy and fun Genes has been known to bring with each release.

Celebrating the euphoric joy of light-hearted pop, Genes provides a potent exploration of the early and sometimes disorienting stages of enamored love. Singing from her chest “rollercoaster take me over till my stomach drops” Genes’ elegant lyricism explores the addictive cocktail of anxiety and excitement we experience when first falling in love. Produced by regular collaborator Ben Oldland (KYE, Ula), ‘Crumble’ features a compelling retro-tinge of pulsing synths that will have you hitting repeat.

“It’s about that overwhelming feeling right before the fall, before you crumble into someone for the first time. Do I catch myself in it, or do I let myself tip completely over the edge? It’s exciting and exhilarating and completely terrifying all at the same time. But, to Crumble is the best part.” Genes

‘Crumble’ is Genes’ most honest song to date. Noticeably darker, her self-assured sound in this single sees her step into her boundless creative power. Featuring a stripped-back first chorus, Genes vocals shine, ultimately building throughout the rest of the song into a powerfully cathartic final chorus. It’s edgy, crunchy, and filled with unparalleled confidence.

In a similar vein to Carly Rae Jepsen, Wafia & Broods, Genes is well on her way to joining these music powerhouses. Having already played main support for Sheppard and Eves Karydas, Genes is set to support Aussie icons Client Liaison in Brisbane on May 6th as well as performing at the Broncos halftime show in June.

In 2019 Maddy launched the Genes solo project, utilizing her strong foundation and experience behind the pop scene to step into her own spotlight. Boasting an impressive song-writing resume under her belt with the likes of Young Franco, Kilter, Will Sparks and Nicky Romero, you can hear her extensive experience in her own music. Since then she has released a string of singles like ‘Kind of Bi’, ‘Super Single’ and ‘Cherry Lips’ as well as her debut EP ‘Super Single’ in late 2021.

Frustrated by the delays and uncertainty of behind-the-scenes songwriting, this pivot to a solo project allowed her to showcase her songwriting and vocal prowess, through a new and more personal lens.

Named as a nod to how her appreciation for music runs so deep within her that it’s nearly ingrained into her DNA, Genes’ only way forward is through her music. Tapping into her own unique and utterly captivating blend of multidimensional pop writing, Genes’ future prospects are as bright as they are dazzling.

With brilliant lyricism of crystal-cut clarity,  addictive vocals and electrifying production –  it’s clear that Genes is the future of pop. Her extensive behind-the-scenes resume sets her apart, positioning her to bolt out of the gate, onwards and upwards. She’s young, immeasurably talented and her passion is unparalleled. 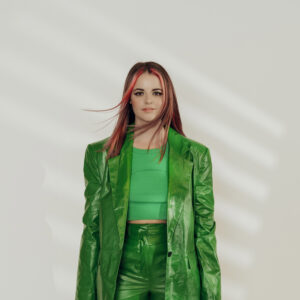 “One of Australia’s most exciting new popstars… I’m kind of obsessed with her.”

“There’s bound to be plenty on the way with Genes… and if the work to come is even only a fraction as fun [of ‘Super Single’], it’s still going to be brilliant.”

“Put Genes in the vanguard of new Aussie pop makers.”

Crumble is out now!