SHOW ADDED DUE TO

Due to overwhelming demand, Gang Of Youths are excited to announce the addition of two massive, new performances to their upcoming angel in realtime. tour of Australia/Aotearoa.

These momentous new additions are only the latest landmark moments in what is shaping up to be the most-anticipated tour of the season.

In March, the band would sell out their biggest London headline show to date at the O2 Academy Brixton and release their first Amazon Original, an orchestral version of the album’s centrepiece ‘spirit boy’, available exclusively on Amazon Music.

With just under four months to go until Australia’s most exciting rock band returns home, don’t miss your chance to see Gang Of Youths in action this coming July/August 2022.

Tickets go on sale Monday, 11 April at 11 am local at handsometours.com 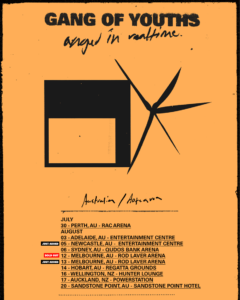 Gang Of Youths above

PRAISE FOR GANG OF YOUTHS

“It’s creatively dense, life-affirming, and unlike any other record, you’ll hear this year. It’s the sound of them reaching for greatness. And boy, do they achieve it.” – triple j

“It’s big music. It might even be lifesaving.” – The Australian

“Sonically, the album expands on Gang Of Youths’ typically propulsive, Titus Andronicus-meets-Springsteen stompers with unexpected forays into ’90s house, trip-hop, UK garage, Afrobeat and disco on the sublime Tend The Garden, as well as Le’aupepe’s Pasifika heritage through the use of Maori choirs, traditional instrumentation, and samples from the recordings of ethnomusicologist David Fanshawe”– The Age

“Gang Of Youths have crafted some of their finest work so far.” – NME Australia

“As a whole, angel in realtime. manages to transcend the events that inspired it to create a cohesive, accessible whole. On one hand, it’s an impressive document that allows fans to delve deep into the story of Le’aupepe’s father as he invites them in and shares the impressive tale, but on the other, it stands tall as a powerful record that works even without context.”– Rolling Stone Australia

“A 77-minute maximalist rock opus…It’s their best record yet. One that sets them up for greater success to come.” – SPIN

“People throw around the word “cinematic” a lot when discussing music, but rarely has an album played out so much like a movie, from its sprawling mythology to its steep emotional stakes.” – STEREOGUM