From its lead single “Wake Me Up” through to the current focus track ‘’Crest of the Wave’’, Foals have generated immense anticipation for the release of their new album ‘Life Is Yours’. The follow-up to the hugely successful two-part ‘Everything Not Saved Will Be Lost’, ‘Life Is Yours’ is a natural evolution for Foals. While their previous record was defined by its sheer and ambition, ‘Life Is Yours’ presents a very different experience: an album that will inspire the euphoria and unifying ambience of this summer’s festival circuit.

Intuitively reflective of this moment in time, ‘Life Is Yours’ was born in the polar opposite circumstances. In the oppressive gloom and isolation of 2020’s bleak midwinter, Foals started to develop new song ideas in their small, windowless rehearsal room in Peckham, south London.  The band – Yannis Philippakis, Jack Bevan and Jimmy Smith – found themselves compelled to create ideas which transported them, both sonically and thematically, to a better place.

As Yannis recalls, “When we were in those bleak moments, the songs became the windows, the telescopes to a future in which the world is re-emerging, the sun is out, and people would be back in the clubs and at shows. The streets felt depopulated and being on the road was such a remote prospect that we felt contained and tethered. But in these songs you can sense our desire for the physical communion of a live show – it’s something you can’t even begin to recreate at home.”

As a result, ‘Life Is Yours’ is a record which positivity beams with sun-kissed summer fervour, life-affirming optimism and a new-found zest for life. Those traits permeate every song that previewed the album, but they also shine throughout the tracks that are now only now unveiled.

The touchpoints are diverse: ‘’Flutter’’ has a dreamy chugging momentum influenced by the space and rhythm of West African guitar grooves, while ‘’Under The Radar’’ feels like a parallel universe in which Pixies played synth-pop. That adventurousness continues with the live feel of the jam “The Sound’’, its playful beats rooted in UK dance music while its spiralling guitar riff has a classic Foals feel. Finally, ‘’Wild Green’’ brings the curtain down with the album’s most expansive moment; an elegy, a farewell, an acceptance that all good things are fleeting.

Foals’ recent high profile live moments have included Radio 1’s Big Weekend, ‘Later… with Jools Holland’, and a UK headline tour that saw them play to a combined audience of 40,000 people in London alone. They’re now set to play shows across the UK, Ireland and Europe before heading to Fuji Rock in Japan. 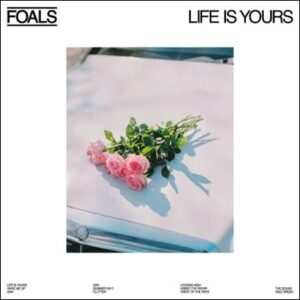 “Foals manage to delight with invigorating innovation while simultaneously keeping their unique identity deeply engrained in a style that is as fresh as it is warm.” 9/10 – The Line of Best Fit

“’Life Is Yours’ is the sound of the band less emerging blinking into the post-pandemic light than bounding back into the saddle.” 4/5 – DIY

“A superb antidote to the gloominess of the world we’ve all been facing.” 4/5 – The Skinny