Reflective and bittersweet to its core, ‘Slow Separation’ is a cinematic ballad that sees Fergus James play with autotune and vocal manipulation for the first time. Thematically, Fergus says the song was an opportunity for him to fully articulate the most potent emotions of the past few of years:

“A story of detachment from people, places, and the person I thought I was, ‘Slow Separation’ is a personal recollection of all the components that shaped me, and my growth away from them.

I was fortunate enough to work with the very talented Gordi and the powerhouse Chris Collins again on production and take the track into a world heavily influenced by the likes of Bon Iver and Imogen Heap.

‘Slow Separation’ has allowed me to further push and develop my sound and songwriting and holds a special place in my new chapter as an artist and as a person.” 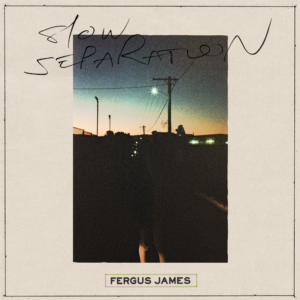 ‘Slow Separation’ follows Fergus’ recent indie anthem ‘Backseat’, which hit the 10th most played song on triple j last month and saw adds to Spotify’s Front Left, The Local List and Apple Music’s New In: Alternative, Alt Pop and Breaking Pop (US). This followed his acclaimed debut EP All Of The Colours which has accumulated over 15 million streams to date.

Fergus also recently featured on Bliss n Eso’s monster track ‘Know Yourself’ from their new album The Sun, which debuted at #2 on the ARIA Album Charts.