False London have released their debut single “Flames” from their upcoming EP, a haunting love letter to how our environment and the people in it shape us, produced by Fletcher Matthews (CLEWS, Dear Seattle, RAAVE TAPES, The Buoys).

“I wrote ‘Flames’ coming out of a situationship where it always felt the other person had one foot in and one foot out at all time,” says lead vocalist Brent Martin of False London. “We were caught in this dance where neither one of us wanted to be the one who cared the most and by the end of it we were both just exhausted. So the track is kind of the last stand, so to speak. It’s putting all the cards on the table, for better or worse, and saying “Let’s cut the bullshit. If we’re going down, let’s go down hard.”

“I wrote the original demo in one sitting, just strumming on my guitar and the words came together organically – which isn’t always that easy,” continues Brent Martin. “When we got to the studio we polished it up a bit but it’s largely the same song as the demo, which I think means I got it right the first time right?”

False London is a band born out of necessity. An unmistakable drive to create, not because of the false promises inherently made in its pursuit but the liberating therapy it guides and guarantees, nothing more, nothing less.

Established as a four-piece from all corners of Greater Sydney in the midst of a pandemic, False London became much more than just a reason to survive but the reason to pursue something meaningful. The outfit advanced to be a silver lining, providing the landscape to discover the bands sound and a style that is true and loved from the inside first. A gritty mix of witty hook-fuelled lyricism by Brent (Boleyn) is laid bare on top of a primal yet refined mix of guitars, bass and drums. After all, to get on the stage again and make poetry that you know sinks into the hearts and souls of people who are unable to express it is humbling.

The group are set to release their upcoming EP later in 2021, a declaration of their devotion to sound and style development that tells the world exactly who False London are. 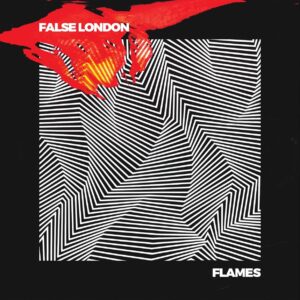 “Flames” is available on all platforms now.