Emerson Snowe today shares his melodic new single ‘Frankenstein’ with fans; the first taste of his forthcoming EP due later this year. News of the song comes hand in hand with a signing to Berlin-based indie label Duchess Box Records for European territories, with the track out via Liberation Records for the rest of the world.

“Frankenstein was the last track written in this soon to be released collection of songs. I wrote it in 30 minutes after a friend listened to a batch of my music and said that it had given them life.”

Premiered by Declan Byrne on triple j and Under The Radar Magazine, the self-produced song was mixed by Nicolas Vernhes (War On Drugs, Spoon, Deerhunter, Animal Collective) and is a deceptively harmonious number full of joyous horns and jangly guitars. The upbeat sonics mask a dark lyrical tone and a self-conscious sentiment. Opening with the honest line ‘Well, I felt as though I wasnʼt right in my head”, and as the singer-songwriter later chants, “Iʼve been trying to outrun everything – Iʼve been around”, the dark sense of self-actualisation within ‘Frankenstein’ becomes evident.

“I had become lost with myself and who I thought I was meant to be. Once people in your life fall away and you’re left with yourself, you can be as self-aware as you want to be – but you’re gonna realise sooner or later you have no clue who you are.

“I had moved from one addiction onto another. This track, although it was written very fast, holds a lot of weight into who I was at that time. A time of self-isolation, not sleeping until midday the next day, and gripping onto any ego I thought I had at all.”

The song has been brought to life with spooky, cut-out animation from LA creative Joe Sams. The off-beat visuals intensify the song’s message with Emerson Snowe represented as ‘Frankenstein’, a skeleton who hides himself in makeshift flesh and skin. The pair’s serendipitous meeting adds to the allure.

“I was invited to a release party in the Hollywood Hills in LA. Later on in the evening a dude arrived holding two life sized hand-made puppets – similar to the muppets from Sesame Street. I watched him place them down in chairs in the dining room, he placed a beer into one of the puppets hands and closed it shut. Whoever this cat was I knew I wanted to do something with him.

“His name was Joe and his animations and mind is not only the most sincere portrayal of an artist I had seen in a long time, but is inspirational and built on pure love for a craft. Later on, he told me that he had folders and scrapbooks full of disembodied corpses and really grotesque images that he wasn’t able to use in any of his previous projects. I’m so grateful to have met him and have something to show of this period in both of our lives.”

‘Frankenstein’ follows the release of Emerson Snowe’s debut EP, That’s Rock ‘n’ Roll.Singles off the EP saw unwavering support from Matt Wilkinson at Beats 1 and BBC Radio 1. From Brisbane originally, Emerson Snowe has toured with King Krule and GUM, and spent the last few years overseas, immersing himself into wider music, fashion and creative circles. He performed debut shows in Tokyo and LA whilst working on music in both areas and also appeared at SXSW and The Great Escape. Currently based in Germany, he walked the runway at Men’s Fashion Week in Paris 2020 for Geoffery B Small and is now represented in the region. He has continued to dance further in the fashion landscape globally, with coveted labels Gucci and Fendi also utilising his music in recent campaigns. 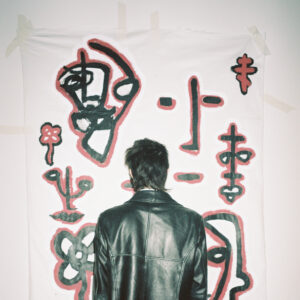 ‘Frankenstein’ is the beginning of the next passage in this exciting artist’s growing story.