Unique and effervescent talent Dylan Cartlidge (UK) has revealed his debut album that takes his catch phrase and well embraced motto “Hope Above Adversity” to its new level, knighting the adage the album’s title. Released via Glassnote Records, The new album features his feel-good tracks from 2021, “Molasses (Walk The Walk),” “Anything Could Happen” and “Hang My Head.”

Speaking on the new album, Dylan said; “My trauma and adversity in childhood made me feel voiceless and destined for the worst. One day, I decided to use my experiences to create the hope for others that I so much lacked. My first album, Hope Above Adversity, is my voice. It is an artistic statement of post traumatic growth and overcoming adversity through holding on to hope. Created alongside world class producers and engineers such as Eg White, James Dring, Dan Parry and Ed from Glass Animals, Hope Above Adversity is just the beginning of my story.”

Hailing from a small town in the North-East of England, Dylan Cartlidge has long since embraced the phrase “Hope Above Adversity“ as his slogan. His life path took a turn out of being submerged in adversity and gave him hope for his future when he was spotted and signed to Glassnote Records in 2018.

2020 was a mammoth year for Dylan Cartlidge, the brilliant and effervescent “Yellow Brick Road” – produced by James Dring (Jamie T, Gorillaz) was released early in 2020 and truly set the tone for what was set to be an enormous next few releases. “Yellow Brick Road” has become Dylan’s biggest streaming success to date, as well being supported by Radio 1’s Jack Saunders, Annie Mac and Huw Stephens, spending 8 weeks on Amazing Radio’s A-List, being supported by John Kennedy at Radio X, Tom Robinson on 6Music and Matt Wilkinson at Beats1.

Following the release of “Yellow Brick Road”, Cartlidge revealed his second single “Cheerleader” in July before dropping his first EP “Yellow Brick Road”. The EP was met with much praise, with critics hailing Cartlidge’s ability to shift from genre to genre as well as the brightness of his sound. The most recent release from Dylan Cartlidge “Molasses (Walk the Walk)” was incredibly well received, landing multiple spots among highly regarded playlists across reputable streaming platforms Spotify, Apple Music, Amazon and Deezer as well hitting a long list of US and UK radio stations, including BBC Radio 1.

His latest single, “Hang My Head,” was premiered by Annie Mac on BBC Radio 1 and was inspired by White’s trip to Zimbabwe, the track opens with rhythmic clapping and catchy whistling, before building to a surging technicolour chorus in which Dylan triumphantly reminds us that “we’ve got to keep on movin.’”

“Hope Above Adversity” is available to stream on all platforms now.

“Up-and-coming singer-songwriter Dylan Cartlidge is one to watch. The North Yorkshire artist has crafted his own unique blend of pop-infused-soul and gritty hip hop… The introspective and glorious ‘Yellow Brick Road’ (is) another brilliant offering from this musical maverick.” – Tone Deaf

“Don’t you just hate it when some young gun artist waltzes in and commences to completely defy all music genres in one single song? Let me be clear. By hate, I mean I am in awe of what the UK’s Dylan Cartlidge has done with his newest release ‘Yellow Brick Road’.” – Indie Shuffle

“Displays a full array of sounds and styles that make him a unique talent.” – Blurred Culture US 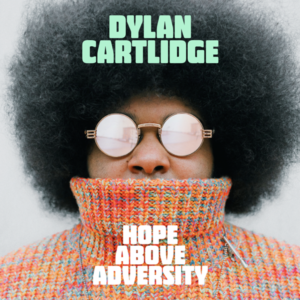