Following the release of ‘Too Tough Terry‘ late last year and subsequent placement in the Hottest 100, Dune Rats power through 2021 with the announcement of their DUNIESPALOOZA tour. See dates and details below, with the pre-sale starting Thurs 18 March 10 AM – Fri 19 March 9 AM AEST and general on-sale from Fri 19 March 10 AM AEST.

A dedication to some of the most iconic venues of Brisbane that supported the band along the way, Dune Rats are playing four nights across Black Bear Lodge, The Zoo, The Triffid, and Fortitude Music Hall joined by a selection of local bands including Sweater Curse, The Cutaways, Semantics, Radolecent, Big Twisty, and Concrete Surfers.

Of the tour, the band share, “Stoked to announce your old mates Dune Rats are coming to play 4 nights around Brisbane to support the venues that supported us over the years. Psyched to have a bunch of different shows with great bands and rage with everyone who has watched the band from the very start. See ya next month!”

Detailing each step of Dune Rats’ journey, the band goes on to note their favourite memories from each venue.

To the Black Bear Lodge, they share, “This was the first show our parents came to, and whilst they were shitting themselves when they sore a young fella hanging from a fire sprinkler that ultimately snapped and fell down, they had a blast. You could say we tore the roof down that night. Our parents and Dunies can’t wait to do it again! P.s shout our folks a beer if you see them.”

The band reminisces about The Zoo, “Growing’n’throwing up in Brisbane The Zoo was the pinnacle of venues and that if we could ever play at it would be a dream come true. On our first album launch, we ended up selling it out, getting too excited and ended up spewing on each other. Couldn’t be more stoked to do it all again.”

On The Triffid, the band continues, “The Triffid has always been a special venue to us, as gromits we use to go to parties there when it was just an airplane hanger, to think that we would end up selling it out 3 nights in a row made us want to go back and smoke a bunch of durries out the front with all our friends like the old times. See ya out the front for a durry!”

Finally to the Fortitude Music Hall, “Our last Brisbane show before the world threw up on itself was at FMH. It was a crazy experience for us to have a hometown show that big literally on the same street where the band started. Feel stoked as fuck to be one of the first bands to kick it off again!”

‘Too Tough Terry‘ is out now via Ratbag Records/BMG,
buy/stream it here. 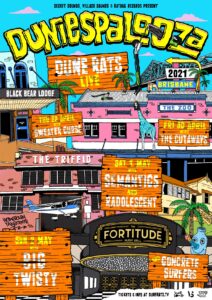