NEW ALBUM SHADOWS AND SHININGS
OUT THIS FRIDAY PRE-ORDER NOW

Aussie hip-hop legend Drapht will tonight share his boisterous new track Hypocrite featuring Eli Greeneyes, dropping at 8pm AEST.  Accompanied by yet another brilliantly comical and outstandingly produced video, Hypocrite is the fourth taste of the prolific artist’s electrifying seventh album, Shadows and Shinings, before it lands this Friday (available for pre-order now).

Although the national tour has been disrupted by Covid, fans across regional WA will now pick up the win, with thirteen shows set for WA over the coming few months, kicking off in Perth at Jack Rabbit Slims on September 10, then moving on to Fremantle, Geraldton, Exmouth, Dampier, Port Headland, Broome, Margaret River, Bunbury, Rockingham, Kalgoorlie, Esperance and finishing up in Albany at Studio 146 on November 20.

Following on from colossal tracks Hollywood Hills, Problem Here and Shadows On My Walls, Hypocrite .Drapht continues to hold up his end of the bargain, dazzling with rapturous beats, clever rhymes. By keeping it real with his clever, introspective songwriting.  “The first part (of the song) came to life after a massive night out in LA with some friends, I used the writing of it to crawl myself out of the depths of the darkest of hangovers.

It’s about everyone having a little slice of Hypocrite in them, and now more than ever in the age of the influencer. So I just wanted to balance out the universe a bit,” Drapht insights. “The second half came about a week later when catching a flight from LA to New Orleans. I was so busy trying to get to the gate to catch my flight I didn’t realise I had just cut off a guy in a wheelchair going to the same gate getting on the same flight. I could definitely get better at slowing down, I think we can all be guilty of getting caught up in the race to the next destination and at times don’t quite understand the damage we’re doing in the process.”

Filmed and directed once again by close Perth friends Complete and Uncool Sam from Drop Shot Media. the video for Hypocrite is another slice of musical comedy. Following Drapht as he shares his story at a ‘Hypocrite Support Group’ before later cutting off a guy in a wheelchair. As he races to catch a flight to get to his own show. “This is the fourth video these guys have been a part of for this album cycle. We’ve been shooting a video every two weeks .And time after time they just keep going above and beyond.”

Recorded in his home studio in Perth, mixed by Andy Lawson and mastered by King Willy Sound. The new album Shadows and Shinings is a 15-track adventure through the human psyche, contemplative and deep.

But still full to bursting with addictive beats and clever production. Drapht explains, “The album cover art is an illustration (drawn by Travis Price) of my childhood home and the title Shadows and Shinings is a metaphor that represents all of the lightest and darkest times within my life while making it. From the birth of my daughter, to having another relationship break down… From reflecting on the success of my career in the industry, to the struggles with my mental health that also came with it. The theme originally started out from a line in one of my favourite books – Man’s Search For Meaning, ‘Even the darkest night will end and the sun will rise’”.

Drapht has notched up his fair share of accolades throughout his career. With platinum records, multi-platinum and gold singles and two ARIA awards under his belt. And Shadows and Shinings is a stellar addition to his discography.

Excited to still be able to celebrate the album’s release with live shows. Drapht explains, “Some of my fondest memories are of touring regional WA. I did year one and two of my schooling up in Broome too,  I always love heading back up north. Also because of what’s happening with the Covid situation at the moment I am more grateful than ever. To be able to get out there and play some shows off the back of the album, when so many of my friends over east don’t have the same opportunities right now.” 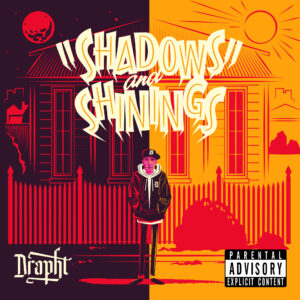 Hypocrite featuring Eli Greeneyes is released at 8pm AEST this evening.
Shadows and Shinings is out September 10 – pre-order now. 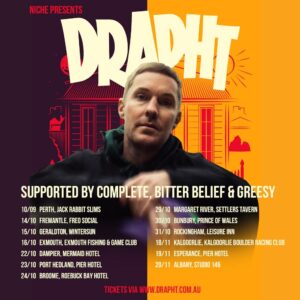