‘HERO SKIES’ FROM THEIR

Dolphin Friendly are set to rock the airwaves this summer with ‘Hero Skies’, their brand new single out now via Meow. Produced by Mako Road’s Connor Jaine, it’s the first single off their much-anticipated forthcoming EP, ‘Won’t be Fools’, and takes the listener on a hallucinogenic journey of visiting the band’s deceased musical heroes that have influenced their pathway as musicians to date. Complimented by a mind-bending video that has the band up in the clouds, ‘Hero Skies’ is a psych-rock homage of an earworm, from one of New Zealand’s best rock acts. Dolphin Friendly’s ‘Hero Skies Tour’ kicks off in November across New Zealand, with 2022 Australian tour dates to be announced.

Renowned for high energy, wild and engaging live performances, the band recently packed out headline tour dates across New Zealand, and are set for a bumper summer schedule full of festival appearances including Le Currents and Outfield Festival.

‘solid gold grooves, soulful questing lyricism and in-the-pocket psych-rock riffage, guaranteed to conjure warm summery vibes to stave off the chilliest autumn evening.’ – Under The Radar ‘if you dig Aussie acts like Ocean Alley, Skegss and Bootleg Rascal, you’re sure to find something you love in Dolphin Friendly.’ – Ditch This Magazine ‘They’re hands down one of the most top-notch live bands you can see in little ol’ NZ.’. – Harry Platt, Muzic.net.nz

The band are an emerging revolutionary soundscape destined to be remembered by their hard-rock anthems cemented together by a visionary of greater consciousness designed to empower humanity.   Their music holds a firm message against the shadow players of the Earth who break the core values that are intrinsic to the peace of the planet, while also allowing the listener to be taken on a personal journey of the band.  The band back this up by actively donating 10% of all their tour profits to disadvantaged individuals, communities, or relevant causes in need, with thousands of dollars being donated to issues associated with; chronic illness, mental health, racism, poverty, and sustainability.

Dolphin Friendly’s live performance quickly become an acclaimed ground-breaking phenomenon for the New Zealand live music scene, with the band relentlessly touring their jaw dropping show of hard Rock N’ Roll antics, allowing them to quickly climb the ladder to gaining status as being one of the best emerging rock acts of New Zealand. 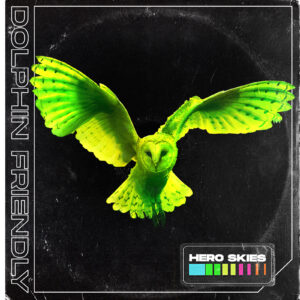