Hot on the heels of announcing their fourth album, ‘Glowing in the Dark’, Django Django now unveil two exciting events which are only set to stoke the flames of anticipation even further.

First up, Hot Chip give the title track their own distinctive twist, refracting the original through a gloriously warped hall of mirrors to deliver something odder, more off-kilter but no less deliriously infectious.

In Hot Chip’s words;  “We were stoked out of our minds to get our hands on this track from Django Django; so strong and fun and addictive! We hope folks like what we’ve done with it and enjoy the sounds as much as we enjoyed working on them!

In the band’s own words; “We’ve been huge fans of Hot Chip from the beginning and had the pleasure of supporting them live a few times now so we’re really chuffed to have a remix from them. Hope you enjoy it.”

The remix will be accompanied by an animated video by Multiple Man, which will premiere on YouTube tonight at 8pm GMT.

Prior to this, the band cordially invite fans to a B2B2B LIVE 2 hour house & disco DJ set TONIGHT, which sees Dave Maclean, Joe Goddard and Dance System facing off over a live stream on YouTube. All three will be present and interacting with fans in the YouTube comments throughout also, making this one battle royale you would not want to miss.

“Django Django’s idiosyncratic brand of psychedelia has made them a staple of festivals from Glastonbury to Fuji Rock and our own Splendour in the Grass”. The West 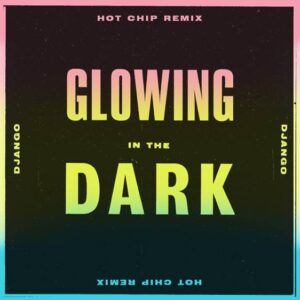 Glowing In The Dark will be released via Because Music / Caroline Australia on 12th February 2021 on vinyl and digital download/streaming on all usual platforms.