Each festival date will erupt in an explosion of prog, rock and metal sounds – and for the very first time in SEVENTEEN EARS, Aussie Rock legends Karnivool and COG will tour together on the same line-up (SURELY a bucket list item for Aussie rock fans!) – and be joined by Ocean Grove, Plini, sleepmakeswaves, Reliqa and Yomi Ship!

This is a festival line-up that no Aussie metal, rock or prog fan can afford to miss. 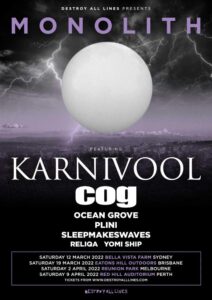