TAKE YOU ON A JOURNEY

40 Years after Journey took the world by storm with their iconic hit ‘Don’t Stop Believing’, Canadian duo Death From Above 1979 – made up of Sebastien Grainger and Jesse F. Keeler -have unveiled their own unique version, exclusively for Amazon Music.

The song, which has woven its way into the fabric of pop culture, with appearances in everything from The Sopranos to Moneyball to Sesame Street, finds the Toronto two-piece putting a characteristically ferocious DFA spin on it.

“We made a kind of witchy version of the song that would make Steve Perry magically join Journey again,” said Sebastien Grainger of Death From Above 1979.

Fans can hear the track now on Rock Scene, Amazon Music’s home for the most exciting new rock music from around the world.

Earlier this year, Death From Above 1979 released their highly anticipated fourth studio album, Is 4 Lovers. To record this album, the pair locked themselves away for several weeks in a single room basement in Los Angeles’s Highland Park to see what would happen and eventually emerged with the purest distillation yet of the power, precision and nuanced personality at the heart of DFA’s unique and influential vision. Written, recorded, produced and mastered by the duo, their fourth album was born, and DFA has never sounded more assuredly like itself than it does on Is 4 Lovers.

Fans can hear Death from Above 1979’s cover of “Don’t Stop Believin’” on the Rock Scene playlist, or by simply asking, “Alexa play the Amazon Original song from Death from Above 19790” in the Amazon Music app for iOS and Android and on Alexa-enabled devices. In addition to the new track, Amazon Music listeners can access hundreds of Amazon Originals featuring both emerging and established artists across numerous genres, available to stream and purchase only on Amazon Music. 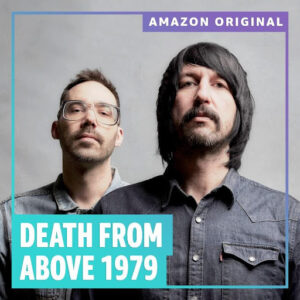