“Fever” is a house/ pop party starter, built for the underground dance floors and dusty doof plains. Heavy with analogue basslines and masterfully twisted and re-edited original soul vocals, the sonic profile of “Fever” holds a certain pizazz that DÉ SAINT has declared as ‘Bounce’.

“Remember that night we were all swimming off the back of Jimmy’s boat. Disclosure was on the top deck playing poker with the soul sisters while The Blaze poured the negroni’s. DÉ SAINT was on the decks B2B with Groove Armada. Bloody Good night!,” said DÉ SAINT on the influence for “Fever”.

Since 2013 DÉ SAINT has been working as a singer songwriter in France and Germany, performing live gigs with DJ’s at house parties and clubs. This time overseas was transformative in crafting DÉ SAINT’s electronic skills that led to 2015’s decision to take the next step as a DJ vocalist.

Upon her return to Australia, DÉ SAINT quickly grew to be the first pick DJ for high end brand giants that brought on work with personages names like Chanel, Louis Vuitton, Google, Vogue, Rolex, YouTube, Maserati, Moët and many many more. Now in her sixth year as a musical director, creating soundscapes for brand campaigns and runway shows at Mercedes Benz Fashion Week, DÉ SAINT  has been working tirelessly to coin her own unique sound. 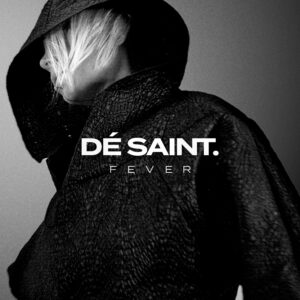 “Fever” is available to stream on all platforms now.