The young emerging artist has made himself known in the Australian music scene, performing at HOTA, and as a member of New Age Notion, playing at venues such as Mo’s Desert Clubhouse and The Flying Cock. David Mac is more than ready to make his mark with his new alternative R&B track ‘Nobody But You’, available to all platforms on the 8th of January. Once described by Dave Ruby Howe from Triple J Unearthed as a “swirling, skittering vibe”, Mac’s vocals on ‘Nobody But You’ carries a soft resonance, supported by meticulous and euphoric production.

Influenced by artists such as The Weeknd, Mansionair, Billie Eilish and Frank Ocean, David Mac’s sound on ‘Nobody But You’ is an invitation to a whole other calming dimension. Written at an important time in the young artist’s life, the song describes the overwhelming yet elating feeling of loving someone for the first time who matches your exact energy. Mac is determined to continue releasing music and putting on shows that touch the hearts of those who connect with being true to yourself and exploring the unknown. 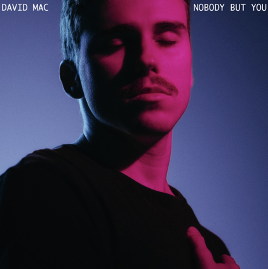