(TOP OF THE POPS

Today marks the 50th anniversary of the release of David Bowie’s THE RISE AND FALL OF ZIGGY STARDUST AND THE SPIDERS FROM MARS. To celebrate, Parlophone Records is proud to announce a special streaming single to mark the album’s Golden Jubilee, “STARMAN (TOP OF THE POPS VERSION 2022 MIX)”.

David Bowie’s performance of “STARMAN” on Top Of The Pops is undoubtedly one of the most essential pieces of music television ever broadcast. It has influenced generations of musicians, artists and writers who saw it at the time and countless others who have since seen it over the decades, from bootleg VHS copies to YouTube clips.

The Top Of The Pops broadcast recording, taken from the BBC’s master, was released on the “STARMAN” 7″ pic disc in 2012 and now changes hands for hundreds of pounds. Back in 1972, the Musicians Union rules stated that to appear on Top Of The Pops, the artist must re-record their track and, in this case, sing live over the top. This new version of “STARMAN” takes the backing track (recorded at Trident Studios on 29th June) and backing vocals, featuring a one-off Bowie ad-lib “Hey Brown Cow”, recorded for the show and adds the lead vocals from the album version (recorded at Trident Studios on 4th February). This new mix was created by ZIGGY STARDUST co-producer Ken Scott from the multi-tracks earlier this year.

Also on 17th June 2022, 50 years and one day after the original U.K. release date, THE RISE AND FALL OF ZIGGY STARDUST AND THE SPIDERS FROM MARS will be issued as a limited edition 50th anniversary half speed mastered LP and a picture disc, featuring the same master and a replica promotional poster for the album.

This new pressing of THE RISE AND FALL OF ZIGGY STARDUST AND THE SPIDERS FROM MARS was cut on a customised late Neumann VMS80 lathe with fully recapped electronics from 192kHz restored masters of the original Trident Studios master tapes, with no additional processing on transfer. The half speed was cut by John Webber at AIR Studios.

THE RISE AND FALL OF ZIGGY STARDUST AND THE SPIDERS FROM MARS is the breakthrough album that catapulted David Bowie into the international spotlight. Over the past 50 years it has remained a touchstone record, growing in stature with each passing year. It is now ingrained in popular culture, its undeniable influence spanning musicians from Arcade Fire to Lady Gaga, to Harry Styles’ androgynous fashion sense to Noel Fielding’s shirts on The Great British Bake-Off to Ziggy make-up challenges on Tik-Tok.

David Bowie laid to rest the Ziggy Stardust persona on 3rd July, 1973 at his infamous last show with the Spiders From Mars at London’s Hammersmith Odeon, but Ziggy’s impact reverberates to this day. Previously unseen footage from this legendary show features in the upcoming MOONAGE DAYDREAM film by Brett Morgen, which will be released in cinemas this September. 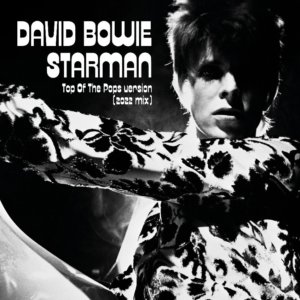