The evolution of Darren Hayes continues to flourish with the release of the iconic artist’s new single, ‘Poison Blood’.

Following on from what has been a stellar pair of single releases thus far in 2022 (‘Let’s Try Being In Love’, ‘Do You Remember?’), ‘Poison Blood’ is another strong example of the way Darren Hayes has reconnected with himself not only on an artistic, but personal level.

The marriage of both sides come together in beautiful cohesion here; the song provides an avenue for Darren to explore darker themes of depression and suicide, and as a result, produce some of his most earnest and raw lyrics to date.

Feelings of space and isolation speak to the themes of ‘Poison Blood’, however the melodic builds and emotional impact of the lyrics anchor the track in the brightness that Darren has brought to the entirety of this new project.

“’Poison Blood’ is a song about choosing to stay when everything else in your life is telling you to leave. I have a family history of depression and suicide and I talk openly about my own diagnosis it in the hope that I might inspire someone who is struggling to seek help, as I have proudly done many times throughout my life.

I describe my depression as a blessing, a gift and a curse all at once. I wouldn’t wish it upon my worst enemy and yet I’m aware I am a deeply sensitive person, and that my unique brain allows me to feel depths of emotions that many people don’t experience.

So I have learned to use those moments to channel melodies and stories that I hope are so real and so relatable they might reach someone else who is in pain, like me, and remind them to stay, like I choose to, every single day.”DARREN HAYES

The release of ‘Poison Blood’ adds to what is becoming a dynamic new era for Darren Hayes. The multi-award winning songwriter and performer cemented his return earlier this year not just with the release of ‘Let’s Try Being In Love’, but with an epic headline performance at the 2022 Sydney Gay and Lesbian Mardi Gras celebration, invigorating the crowd at the Sydney Cricket Ground.

A moment to be absorbed by fans and artists alike, the performance was a touchstone for Darren. Not only was it a homecoming, but an integral part of Darren’s experience of rebirth that this new collection of music and art has provoked within himself.

Darren Hayes will return to Australian stages for the first time in over a decade in January/February 2023 with his ‘Do You Remember?’ Tour – 25 Years Of Savage Garden, Solo Hits And More.

‘Poison Blood’ is out now via Powdered Sugar Productions. Official single artwork below 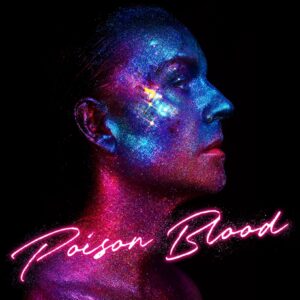