DELIVER ‘ONE TOO’ HIT

3x CCMA Award winner for Entertainer of the Year, Dallas Smith has teamed up with label mate and 15x CCMA Awards nominee Mackenzie Porter to deliver his brand new single ‘One Too’ out now.. The Big Loud Records international star shares the track on the heels of his 12th chart topping hit ‘Hide From A Broken Heart’ and recent Music Canada certifications for the Platinum certified #1 singles ‘Like A Man,’ ‘Cheap Seats,’ and ‘Side Effects,’ in addition to the #1 track ‘Some Things Never Change’ feat. HARDY and Smith’s most recent JUNO and CCMA Award nominated album Timeless which both earned Gold certifications.

“I couldn’t be more thrilled to collaborate with MacKenzie on this song,” shares Smith. “This song is a gift written by Tom Jordan, Mitchell Thompson [Seaforth], Alysa Vanderheym, and Rocky Block and I’m so excited for everyone to hear it. It’s literally a ‘One Too’ hit that strikes every chord both personally and musically and I can’t think of a better duet partner to share this song with.”

“Dallas Smith and I played a show back in 2015 together,” shared MacKenzie. “In 2016 he introduced me to my now label, producer, and manager. In 2019 he took me out on tour with him for 2 months. Many of us know Dallas as an incredible artist, but what you might not know is how much he helps other artists around him.  He shares his team, his band, his knowledge and connects the dots for artists he believes in. In 2022 I somehow convinced him to sing a song with me. It’s called ‘ONE TOO’ and I can’t wait for you to hear it.”

Last month, Smith, marked his return to Music City with a performance at the iconic Ryman Auditorium. Smith who has previously performed on the Grand Ole Opry stage, made his much-anticipated debut at the Ryman, opening for country superstar Trace Adkins.

MacKenzie Porter, who scored a #1 in Australia on Countrytown’s Hot 50 chart last year with ‘These Days,’ is travelling down under in September to play CMC Rocks for the first time. Directly following the festival, Porter will be joining Brad Paisley on the Australian and New Zealand leg of his world tour, playing in Brisbane, Melbourne, Mareeba, Sydney and Auckland. Full itinerary below. Visit www.mackenzieporter.com for tickets and more information. 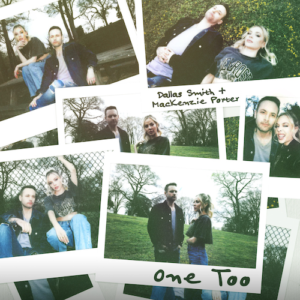 ABOUT DALLAS SMITH:A multiple JUNO and CCMA Award winning entertainer, Dallas Smith is one of the most celebrated artists in Canadian country music. Amassing 18 Canadian Gold-certified singles, four Canadian Gold-certified albums, and seven Canadian Platinum-certified singles along with more than 500 MILLION collective streams to date and 2 MILLION global album equivalents. Smith is also the first and only Canadian country artist in the Nielsen BDS era to have TWELVE #1 singles, including four consecutive chart-toppers from the same album, and closed out 2019 as the most played artist (domestic/international) at Canadian country radio for the year.

Adding to the list of accolades, Smith is the sole Canadian country artist in the Nielsen BDS and Mediabase era to earn TWELVE #1 songs in history and have 23 consecutive singles peak in the Top 10 of the country airplay chart. Smith is the three-time CCMA Award winner for Entertainer of the Year (2019/2020/2021), continuing to set the bar high for Country music in all that he does. In 2021, Smith launched the Lifted Dallas Smith Charitable Foundation – a non-profit organization committed to ensuring that mental health services are accessible to anyone and everyone in need.  Winner of four 2021 CCMA Awards (Entertainer of the Year, Male Artist of the Year, Single of the Year and Top Selling Canadian Album of the Year), Smith announced the national headlining Some Things Never Change Tour for 2022 and most recently topped the radio charts with his 12th NUMBER ONE single “Hide From A Broken Heart”.

ABOUT MACKENZIE PORTER:Canada born, Nashville-based MacKenzie Porter is rising to international acclaim after building momentum with her first-ever U.S. #1, six-week chart topping Dustin Lynch collaboration “Thinking ‘Bout You.” Porter made her own mark simultaneously, releasing brand-new songs “Coming Soon To A Bar Near You,” “Pickup,” “Unlonely Me,” and “Heaven Heard Me” in late 2021. Her “mesmerizing vocals and hook-driven songs” (Billboard) sparked headline-worthy accolades, debuting on the Grand Ole Opry, earning four 2021 CCMA Awards nominations, and a 2021 JUNO nomination for her Joey Moi-produced Country Album of the Year contender, DRINKIN’ SONGS: THE COLLECTION.

Making history, Porter became the first female artist since Shania Twain to have three consecutive #1 singles at Canadian country radio with “About You,” “These Days” and “Seeing Other People.” Porter also earned her first crossover Top 10 at Canadian pop radio – a first since 2003 for a Canadian country artist – with “These Days (Remix),” and joined CMT’s Next Women of Country class of 2021. The triple threat previously starred in cult-followed sci-fi television series Travelers now on Netflix, and just wrapped a three-month run serving as direct support on Walker Hayes’ Fancy Like Tour.