“This collection of songs encompasses the year I had in pre covid 2019 – it was a blur of self denial where I found clues in my own music as to what I was feeling, when I was seemingly okay on the surface,” said Stewart. “I’m forever getting better at connecting those two things, but time and time again it seems to be an outlet where I get a glimpse into my truest self. When I look back on this body of work I see all the clues as to where I was becoming a little unhinged, but also an unabashed confidence which I think helped me step into some unknown territory. I loved collaborating and letting other people into my creative process and this EP will forever landmark a time where I was finally able to let people in. There’s a lot of darkness housed in pretty exteriors and that seems to be the common thread amongst the songs. I feel a little lighter that it will be out in the world.”

Over time, Stewart built a collection of songs that all fit within the same style. When he reached 10 songs he decided to recognise that he was on to something, leaving him with no other choice than to proceed and pursue the project. Titling the project after his desktop file ‘Congrats’ which was a self congratulations for writing 10 songs, the project was there dubbed Congrats. The EP’s focus track “Believe The Hype” displays the depth and versatility of Congrats. Incorporating soft spoken with mellow rhythmic versus alongside high spirited choruses, proving Ben’s thoughtful processes.

“I wanted these songs to feel classic despite being suited up in modern production, but I didn’t know if it was possible. I didn’t know if my songs would work inside a pop housing. I was listening to artists who push the boundaries of rap and trap music like Roddy Ricch, Yung Lean and Post Malone – I get the same feelings of excitement when I tap into the energy of their music as I did when I first found heavy music. I can feel the same pain and it has filled my sails for exploring new territory. I want to be uncomfortable again,” said Stewart.

The first release from Pharaoh, “Russian Roulette,” premiered on triple j’s Home and Hosed and was promptly added to rotation; receiving praise for its effortlessly slick production and bell-clear vocals. “Russian Roulette is about running at self destruction while being dragged back by the collar of conscience. Every time I think I have figured myself out, I get thrown a curveball,” said Stewart. The music video for “Russian Roulette”, directed by Kyle Caulfield, reflects this darkness through a vintage, Quentin Tarantino-esque aesthetic.

Follow up single, “Lobotomy,” combined Stewart’s sonic pop inspirations (The 1975, Joji and Post Malone) with his candid, pop-punk influenced lyricism, proving that the Congrats project would be a formidable foray into the pop world for Stewart. The music video for “Lobotomy,” directed by ROME (Mallrat, Benee), is a glitchy representation of heartbreak, showcasing the distinguishing charm and magnetism of Stewart’s solo performances.

Last month, Stewart released the “Overthink” feat. Kwasi, the final tease before the EP release. “The session for ‘Overthink’ was effortless,” said Kwasi. “It felt like the meshing of our diverse influences gave us a license to do whatever we wanted. The process of writing ‘Overthink’ was cathartic for me. A nice escape from the bullshit. The fact that the song is coming out is just a cherry on top.”

Stewart teamed up with Kyle Caulfield again for the music video for “Overthink.” “The ultimate concept of the video was to create a timeless, engaging world,” said Caulfield. “When Ben first sent me the original mix, I was totally immersed into my own world, overcoming a mix of emotions. We tried to best emulate these emotions in both the aesthetic, choice of location, and the unfolding and ever-revealing narrative of the clip.”

Congrats was born from what Stewart refers to as a self-awakening. After growing up a fan of punk, rock and hardcore, he found his tastes broadened as he matured; he began to fall in love with modern pop, hip-hop, and the big studio sounds that accompanied both.

Soon Stewart’s skillset had completely re-developed from everything he’d learned in his already successful career as a DIY indie rocker, as this new approach opened up a world of possibilities. Already realising he had a natural ability at writing lyrics and story-telling, he began to focus on his shortfalls and focus on what his new creative partners brought to the table.

The result is the powerful, soaring debut EP Pharoah, released via Australian indie stalwarts Dew Process – a prospect that Stewart is extremely ready for. 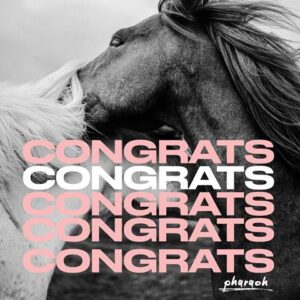 “Pharaoh” EP is now available on all streaming services.