Produced by ARIA Award nominee Konstantin Kersting (Mallrat, Tones & I, Jungle Giants), this single is our last taste before Congrats releases his larger body of work next month.

Combining his sonic pop inspirations (The 1975, Joji and Post Malone) with his candid, pop-punk influenced lyricism, the Congrats project is proving to be a formidable foray into the pop world for Stewart.

“The recording session was how all songs should be written, we were on the edge of our seat the whole time trying to figure out what the hell we were creating. It’s the music I want to be making; it doesn’t sound like anything else and yet feels familiar & classic,” said Stewart. “I get to channel this wavelength when working with Kwasi and Hamley because our musical tastes are so varied and yet we have so much crossover. None of us have any preconceptions and aren’t afraid to embarrass ourselves – we didn’t set out with another artist or sound in mind.”

“Every time I step into a session with Congrats it’s exciting. He’s one of the few artists that can let go of any preconceived notion of what something “should” sound like and let the music speak for itself,” said Kwasi. “The session for ‘Overthink’ was effortless. It felt like the meshing of our diverse influences gave us a license to do whatever we wanted. The process of writing ‘Overthink’ was cathartic for me. A nice escape from the bullshit. The fact that the song is coming out is just a cherry on top.”

“The video was heaps of fun, but humbling at the same time,” said Stewart. “Having to groove in the middle of a packed park on a sunny day or in front of a blue wall on a packed street can really test your confidence with bystanders looking in. I admire Kwasi and Kyle for the unrelenting confidence they had the entire time we were filming – we had a ball.”

“Working with Ben is always a pleasure, I’ve never told anyone such crazy wild ideas and had them completely trust my vision,” said director, Kyle Caulfield. “I’m yet to work with another artist as dedicated and driven towards creating the best work possible, Ben is always fulfilling the producer, assistant director, runner, and all other roles associated with these films, it’s largely due to his openness to run around and get costumes, organise locations, that films like this can happen in just a couple of days. The vibe shared between myself, Ben, and Kwasi on set definitely shines through in this clip.

The ultimate concept of the video was to create a timeless, engaging world. When Ben first sent me the original mix, I was totally immersed into my own world, overcoming a mix of emotions. We tried to best emulate these emotions in both the aesthetic, choice of location, and the unfolding and ever-revealing narrative of the clip.”

Congrats was born from what Stewart refers to as a self-awakening. After growing up a fan of punk, rock and hardcore, he found his tastes broadened as he matured; he began to fall in love with modern pop, hip-hop, and the big studio sounds that accompanied both.

Soon his skillset had completely re-developed from everything he’d learned in his already successful career as a DIY indie rocker, as this new approach opened up a world of possibilities. The result has been two soaring early singles, with an EP set to follow next month via new label partner and Australian indie stalwarts Dew Process – a prospect that Stewart is clearly primed for.

Congrats has been warmly embraced by fans and industry trendsetters alike. Since the humble beginnings of Stewart’s solo journey he has been praised by The Music and Triple J’s Sose Fuamoli who named “Russian Roulette” as “another strong step forward.” Collecting plays across both radio and streaming services, Congrats has accumulated hundreds of thousands of streams on Spotify alone.

“Overthink” feat. Kwasi is now available on all streaming services. 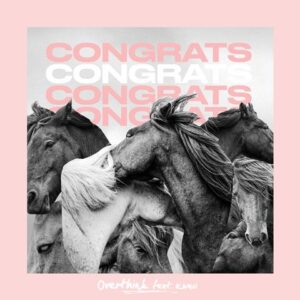