“WANT YOU THAT WAY”

Sydney-based sister duo CLEWS – originally hailing from a one-school town on the NSW south coast – leave it all on the field in the honesty, energy and elation they bring to their latest track “Want You That Way” – out today.

LISTEN TO “WANT YOU THAT WAY” HERE

“Want You That Way” soars to new heights, CLEWS romancing more with the pop influences the pair have flirted with on earlier releases. Full of surprising textures and built up with stacks of towering harmonies, “Want You That Way” takes gems from the duo’s love of ‘90s rock and sets them firmly in the stone of 2021. Offering a fresh sound that hits with bittersweet pertinence to our times, it lands in the collective acquiescence that we have to let go of how things were before, not yearn after life as we knew it.

“This song came with the heart wrenching revelation that there’s no need to hold on to people who can’t be who you want them to be,” says Lily. “I wrote Want You That Way on a rainy day when I was reflecting on my oldest friendship from childhood that’s so non-existent now it’s like it never happened. It’s about how lots of different relationships can affect you; your friendships, romantic relationships, your future relationship with the child you’re going to adopt someday, your past relationship with versions of yourself. I’m approaching 25 years of being single, an experience that I feel quite alone in because I haven’t heard too many people talk about it. This song made me realise that although I’ve never been in a long romantic relationship, my friendships have taught me a lot about love. It’s sad that sometimes people have to get cut out to let others in. But in the end, I hope this song serves as a proclamation of self-love and the confidence to be happy on your own.”

“Want You That Way” started on acoustic guitar in Lily’s living room before she took it to Grace to add guitars and harmonies, finding its final iteration through live renditions and studio experiments where producer Dylan Adams (DMA’S, West Thebarton) helped make a sad song shine bright.

Lily reflects on the recording process: “This song was part of our live set with our band before we headed into the studio, so it was already fleshed out in terms of the feel and structure. Even though it’s a sad song, Grace and I knew it would lend itself well to being up and poppy sonically – I love Trojan horsing a gut-wrenching story in a fist-pumping anthem. Our band and Dylan, our producer, helped push it to an edgier pop sound that we haven’t really done before.”

CLEWS kept busy in 2020, creating their first body of work and continuing to play live shows. They recently returned to stages in Sydney supporting DMA’S and Tash Sultana, selling out two headline shows at The Lansdowne and appearing at venues in Newcastle and Wollongong, always putting a personal touch to their headline appearances for the audiences they now consider part of the big CLEWS extended family.

The band’s development as a live act has influenced their songwriting, with a certain looseness and a natural approach to performance putting their light and loving dynamic as sisters on display and permeating through new studio recordings. Having spent the last year building a reputation as a formidable live act both in Australia and the UK, CLEWS have become more than just a band to watch.

2021 is set to be a huge year for CLEWS, Lily and Grace are ready to kick off what is set to be their biggest phase of creativity and music yet.

“What You That Way” is available on all platforms now. 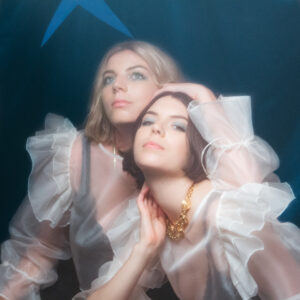