With a debut show sharing stages with Redhook & The Dead Love under their belt, Brisbane progressive-metal prodigies Citadel have today unveiled their second single, ‘Parasyte’. A cathartic and stirring track, detailing the harrowing slew of emotions guitarist Nat Patterson dealt with during the ending of his engagement, coinciding with the death of a close family member. Forced to return to his parent’s home, it details the breadth of emotions he felt during this time period; ranging from deep sadness, to burning frustration. A moving track that begins with singer Russell Miller’s musings atop a singular piano. Building alongside the story’s despair, ‘Parasyte’ reaches a chorus crescendo with the driven guitars of Liam Kelly kicking in alongside drummer Dane Pulvirenti’s syncopated rhythms.

“Parasyte was written at a very dark time in my life, following the end of an engagement and the death of a close family member as well, and is one of the only songs we have where I also wrote the lyrics. Parasyte tackles the complex and harrowing feelings I felt directly after my fiance and I broke it off. I had moved back to my parent’s house to kind of “start over”, and was enduring feelings ranging from deep sadness to burning frustration and anger at how things had turned out.” Nat Patterson, Citadel

“Working alongside Gareth was fantastic, particularly on Parasyte where there is such a heavy emphasis on the piano parts. Having something with the knowledge and skills to turn our rudimentary ideas into something massive (the layered vocals in the chorus being a perfect example) was excellent and we are stoked with the end product.”  Liam Kelly, Citadel

Having now introduced themselves to the audiences throughout Brisbane & Australia, Citadel has a string of upcoming performances, sharing stages with Voyager, Semantics & more in the coming months. With more music in their back-pocket, it is only a matter of time before they become a household name across the Australian heavy music landscape.

“it traverses big expansive rock to moody loner sounds and pivots between them with ease.”

“Citadel are no strangers to the scene, having performed together in previous acts, Osaka Punch, Wildheart and Bayharbour it makes sense that their debut packs a very big punch. Sundered Souls comes at you as a huge anthemic metal vibe, massive riffs, pounding drum work and a demanding vocal delivery. Kicking in slowly, it doesn’t take long for things to fire up big time.”

“The esteemed Brisbane creatives combine to form a quintet, poised to unleash their talent and vision before spreading their progressive metal & melodic brawn fusion across borders and throughout Australia.”

With Voyager, Acolyte, The Stranger & more

‘Parasyte’ is out now. Official single artwork below 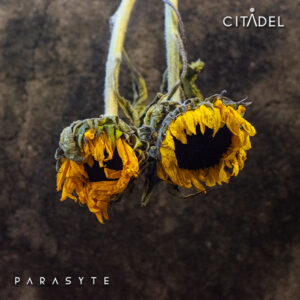