Brooding and enigmatic, Thomas Keating has today announced his yearner of a new single, Cold Night, out now.  Inspired by distance, a cold Melbourne winter, and dreary early mornings, Cold Night is an exciting addition to Thomas’s glowing discography.  The track is also accompanied by a stunning clip, directed by Kieran Gilfeather.

Evocative of Elliot Smith, Phoebe Bridgers and Angie McMahon, Cold Night is a broody rambler, made for grey mornings and stomping through puddles in the rain.  Thomas’s gentle voice wraps around a slow, steady beat as delicate strings float around the arrangement, like the silver lining on a cloud.  The track was mixed by Thomas himself, produced by Gordon Burke and mastered by Nick Franklin, and reflects a deep sense of yearning, of wanting, as Thomas explains, “A few years ago, I moved to Melbourne for the year.  I moved in the middle of winter, I was living in Fitzroy and I was feeling pretty down and lonely since I hardly knew anyone in this new city,  and I could not believe how cold it was!  I was working at this café at the time and I would start at 6 in the morning and walk to work.  I came up with lyric for the chorus as I was walking to work one morning.”

Directed by Kieran Gilfeather, the video for Cold Night is dark and intimate, as Thomas is silhouetted both seated at the piano and beside another figure in a car, driving the streets in the glowing night.  It’s mysterious, almost incomplete, and keeps the viewer on their toes as the story progresses.  Wordless frustrations peak between the couple in the car, until the only thing left in sight is the rear window.  “Kieran and I came up with the concept together. I wanted to do something with the video clip that expressed the yearning and lonely feeling I was experiencing when I wrote the song,” says Thomas. “I wanted to use the video to express the difficulties that can be experienced in a relationship, how love can be beautiful but also complicated at the same time”.

Cold Night is a highlight for Thomas in what has been a challenging year, as he explains, “It’s been a really interesting time.  It has pretty much taken touring and performing off the table for me.  I moved into a new studio though, with a bunch of other musicians, so I have actually really enjoyed the time writing and collaborating.”

Cold Night is out now! 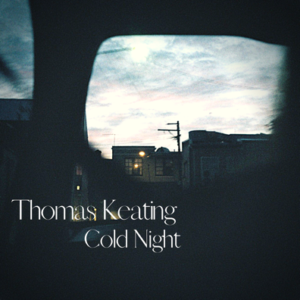