Released two days ahead of Halloween, as a thank you to fans for the phenomenal reception to Screen Violence, the Director’s Cut continues a milestone era for the band, celebrating the spooky season deep within the cinematic universe that Screen Violenceimmerses itself in.

‘Screaming’ and ‘Bitter End’ face the disillusionment and fear that permeate the record head on, while the eerie darkness of ‘Killer’ devilishly flips the script: “I turned into a killer, I’m insane, I’ll cry you a river, down the drain, are you entertained?”.

On the new tracks, frontwoman Lauren Mayberry says “This album was thematically so different to previous CHVRCHES albums that it would have been rude of us to let Halloween come and go without injecting some more Screen Violence into it. ‘Killer’, ‘Bitter End’ and ‘Screaming’ were all started in 2020 and finished just after the album was released. As any good horror fan knows, just because the film ends, it doesn’t mean the story does.”

“A collection of 10 sparkling songs that often musically belie the dark subject-matter of disillusionment, anxiety and fear…” ★★★★ – Sydney Morning Herald

“Once again the Scottish three-piece delight with their knack for infusing bittersweetness with immense warmth, investigating the conflicts that occur through and adjacent to our black mirrors via shimmering experiments into synth arpeggios and textured breakbeats.” – STACK

“An uncompromising barrage of lyrical rawness and integrity.” – Clash

“A punchy and determined effort, full of big hooks and awash with glittering synth textures.” – Uncut 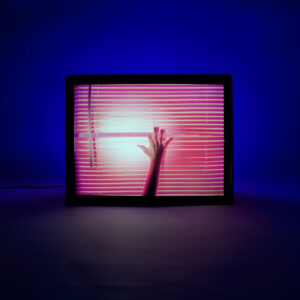