“A collection of 10 sparkling songs that often musically belie the dark subject-matter of disillusionment, anxiety and fear…” ★★★★ – Sydney Morning Herald

“Once again the Scottish three-piece delight with their knack for infusing bitter sweetness with immense warmth, investigating the conflicts that occur through and adjacent to our black mirrors via shimmering experiments into synth arpeggios and textured breakbeats.”
– STACK

To celebrate the release of Screen Violence, this weekend will see the band perform at Masonic Lodge at Hollywood Forever in Los Angeles, marking their first live performance in nearly two years. The show will be live streamed globally on Amazon Music’s Twitch Channel; fans in Australia and New Zealand can tune in from 2pm AEST / 4pm NZST on Saturday 28 August.

To experience 2020 was to experience something of screen violence. It was to struggle to make the people you loved feel more real than the characters on TV shows, and to experience a world of trauma and tumult as if it was another TV show. 2021, however, marks a decade together for Iain Cook, Martin Doherty, and Lauren Mayberry – a decade whose sound they have helped to create and define.

“I think for me it was helpful to go into the process with the idea that I could write something escapist almost,” Mayberry says of the album. “That felt freeing initially, to have concepts and stories to weave your own feelings and experiences through but in the end, all the lyrics were definitely still personal.” While Martin Doherty adds, “To me, the screen aspect was a bit more literal. When we were making the record, it was like half of our lives were lived through screens. What began as a concept was now a lifeline.”

Screen Violence – originally conceived as a name for the band, but revived for the album ten years later and during a pandemic when the reality of screen violence has never been more pertinent – CHVRCHES narrate the theme of screen violence in three main forms: on screen, by screens and through screens, touching on feelings of loneliness, disillusionment, fear, heartbreak and regret, and describing both the days of the Video Nasty and the power the screens all around us wield today. Perhaps ironically, or not ironic at all, the album was recorded almost entirely remotely between Los Angeles and Glasgow where they self-produced and mixed the album via video calls and audio sharing programs to create something that is unique and special, but inherently CHVRCHES. 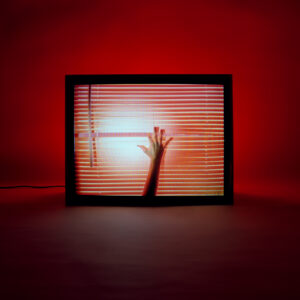